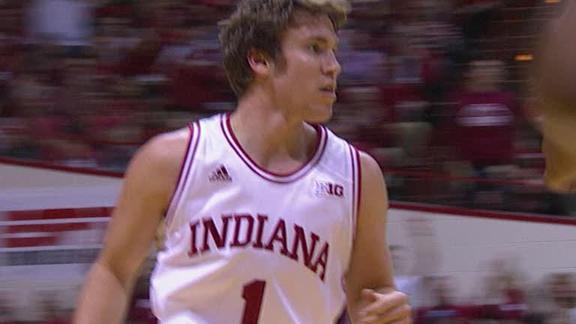 The 7-foot sophomore scored 20 points, grabbed eight rebounds, was 8 of 13 from the field and dominated the middle, leading No. 1 Indiana to its most impressive victory this season — a stunning 83-59 rout over No. 14 North Carolina.In a game that pitted two of the nation’s most storied college programs — they have combined for 10 national titles and have a combined 3,767 all-time wins — Zeller made sure it was no contest.When he wasn’t taking advantage of opportunities in the middle, he played the decoy for teammates who were cutting and slashing to the basket.The combination was just too much for North Carolina (5-2), playing for the first time since returning from Hawaii last week.Zeller just missed getting his second double-double of the season and may have had he not come out of the game early. He had plenty of help, too. Victor Oladipo and Will Sheehey both added 19 points and Jordan Hulls had 13.Indiana (7-0) has won 34 consecutive home games in November, dating to a 2005 loss to Duke in the same tournament.The Tar Heels have lost twice in the past week to teams from the Hoosier State — last Tuesday to two-time national runner-up Butler, and now to Indiana in much the same manner. They trailed by 29 points in the second half of both games and by more than 30 in Bloomington.North Carolina certainly missed sophomore guard P.J. Hairston, who stayed in Chapel Hill, N.C., this week because of a sprained left knee. Without him, Dexter Strickland had 14 points, Marcus Paige had 11 and James Michael McAdoo finished with 10 — not nearly enough on a night the Tar Heels shot poorly.For the first 16 minutes, the highly hyped matchup lived up to its billing as the teams battled to a 31-31 draw.But when Zeller started setting picks late in the first half, everything changed.Zeller’s outside presence opened up lanes for his teammates, and when Zeller scored six points in the final 3 minutes of the half, the Hoosiers took a 46-37 lead into the locker room. Zeller had 13 points, four rebounds, three blocks, one assist and one steal in the first 20 minutes, and he was just getting started.When North Carolina went cold to start the second half, Zeller and Oladipo made them pay. Indiana’s two` big scorers accounted for seven points in a 13-0 run that made it 59-37 with more than 15 minutes to go.The Tar Heels never challenged again, and lost for the fifth time in its last seven games against the Hoosiers, a span that began with the 1981 national championship game.

Copyright by STATS LLC and The Associated Press

How to keep your pets healthy and happy all winter long

The next wave of medicine: banking your stem cells for therapeutic use

The next wave of medicine: banking your stem cells for therapeutic use