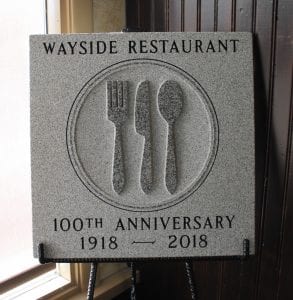 brown and crisp, the other holds donuts coated thick with crunchy grains of sugar. She checks with each diners, who, even well into retirement age, pluck the treats like children. She then moves out from behind the counter and begins asking folks who, by 8:15AM, have settled into their booths with coffees and menus.

July marks the official 100th anniversary of the Wayside Restaurant. Which is a big deal. It now joins 240 other restaurants that have made it to the 100 year mark. And with over a million restaurants in the United States, that puts the odds for this success at a figure much less than 1%. And yet, at 8:15AM on a Friday, the place is filling up fast.

Wayside diners are diverse but seem to share two things: a general enthusiasm for the food and a sort of I’m-a-regular-ness. Families chat over plates full of eggs and pancakes. A man sits alone eating a fruit cup. Two fellas in work clothes drink coffee. Waitresses greet many by name and nods, and conversations start without specifics, as if everyone simply knows who is up to what, when, and where.

The Wayside is advertising their 100 years of success in a multitude of ways. The foyer sports a large granite plaque, a book, titled “It’s Worth the Ride to the Wayside: Celebrating 100 Years with Anniversary Ale, Yankee Cooking and Ice Cream” sits propped by the register, and back towards the kitchen, a bookcase is packed with Wayside #1 foam fingers, commemorative t-shirts, and collectible “Shut up and Deal” playing cards.

The Wayside Restaurant has been a family-owned restaurant from the start, in 1918. It was opened by Effie Ballou as a roadside lunchtime eatery just months before the end of WWI. The Ballou family ran the restaurant until 1945, and then the Fish family bought it and ran it for twenty-one years. Then, in 1966, Eugene and Harriet Galfettis bought the restaurant and ran it for more than fifty years. Their daughter, Karen and her husband, Brian Zecchinelli took it over in 1998 and, twenty years later, are still the current owners.

The Wayside is open year-round, from 6:30AM-9:30PM, with the exception of 7 holidays and it serves approximately 1,000 meals per day. It’s a large building, and as plates steaming with gravy and biscuits make their way to tables of hungry eaters, it’s easy to assume that the Wayside, although delicious, is neither health-conscious nor environmentally friendly. But that would be wrong.

The full-scale bakery and restaurant not only offers a gluten-free menu and locally sourced meats and vegetables, they have also implemented over fifty green initiatives over the past 20 years. Plus, they are a member of the Vermont Business Environmental Partnership. They have been composting for more than ten years and have been the recipient of Grow Compost of Vermont’s Certificate of Environmental Stewardship for diverting 102,600 pounds of food scraps from disposal in 2017.

They also care about their employees. There are over 60 employees at the Wayside Restaurant. There is one with forty years of work, six with twenty-five, and nineteen with ten or more. In November, to honor their hard work, the Wayside is awarding them with a bonus of $100 for each year worked. For those who have been here a while, that’s a nice little bonus.

As for the customers, there’s something more here than just the convenience of getting a meal. The Wayside has withstood the test of time in the same hearty fashion that many local folks have: adapting to change while holding on to core values and focusing on the importance of community. It has served as a spot where people can come together, remaining a grounded and stable constant in an ever-changing world.

As the morning moves towards 9:00 AM, the counter fills. One man nods to another and asks “What you been up to?” The other responds, “Still workin.” The first man just nods. After some coffee, maybe some toast, they leave to go about their day, only to be replaced by another gaggle of counter-folk who all know each other, who all order coffee, and who all the waitresses address by name.

On Sunday, July 29th between 6:30-9:30 pm, the Wayside Restaurant will host their Customer Appreciation event with a 100th Anniversary Ice Cream Social. At dusk, there will be fireworks. For more information on the restaurant or any of their planned events, visit WaysideRestaurant.com.