Will your pet be safe during an emergency?

Will your pet be safe during an emergency? 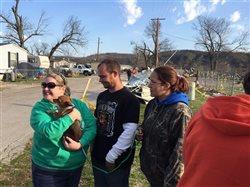 Natural disasters can devastate families and communities in seconds, taking lives and destroying homes and properties. Sadly, pets are under-reported casualties of such disasters. For people who’ve lost everything else, losing or being unable to care for their furry family members can make an already emotionally crippling blow that much worse.

“When a disaster occurs, people don’t always know what to do for their pets,” says Gina Gardner, President of the Humane Society of Tulsa. The organization’s HEART Team, which Gardner leads, responded to the devastating 2013 tornado in Moore, Oklahoma, which killed 24 people and caused an estimated $ 2 billion in property damage. “One of the most important roles we play is helping victims care for their pets when they have lost everything. When families have lost all they have and you hand them a bag of pet food, the look of gratitude on their faces is overwhelming. They love their pets, and being able to feed and care for them is an important concern victims feel after a disaster.”

Following the 2013 incident in Moore, Gardner’s team was able to provide pet food to families through a donation from the Hill’s Pet Nutrition’s Disaster Relief Network. In the past two years, Hill’s network delivered free pet food to more than 60 animal shelters and veterinary clinics across the country in response to natural emergencies, including floods in Colorado, fires in Idaho and Arizona, the mudslide in Washington state, and tornadoes in the central and southern regions of the country, including Moore, Oklahoma.

While summer storms can be notoriously dangerous in many areas of the country, it’s vital for families to be prepared for natural disasters throughout the year. Pet parents can easily prepare to care for their pets during potential emergencies by following these tips from the Hill’s Disaster Relief Network and Hill’s Pet Nutrition:

* Create an emergency kit. “Your ‘Pet Emergency Go-Kit’ should be tailored to your pet’s individual needs,” says Dr. Ellen Lowery, Director of U.S. Veterinary and Professional Affairs for Hill’s. “Each kit should include a three-day supply of the pet’s preferred food in a waterproof container, bottled water, a harness and leash, medications and medical records, a list of local veterinarians and animal care organizations, notes on the pet’s feeding routine and any behavioral issues, comfort toys and a blanket.” Consider taking a crate or carrier for smaller animals in the event you’ll be away from home for an extended period.

* Include your pet in preparing your family’s emergency plan. For example, if you have to evacuate, who will be responsible for ensuring the dog or cat goes with you? Consider where your pet likes to hide in the house so you can evacuate quickly.

* “Microchip your pets or make sure they’re wearing a collar with an ID tag, so that emergency responders can easily identify them and contact you if they become lost,” Lowery recommends.

* Display a pet rescue decal on your front door or in a window facing the street so emergency teams will know you have a pet in the house.

* Decide in advance where you’ll take your pet if you have to evacuate and the disaster shelter is unable to accept pets. Identify pet-friendly motels and hotels in the area so you’ll have somewhere to go.

* Carry a picture of your pet with you or on your mobile phone in case you become separated.

In the wake of Hurricane Katrina, one widely cited report stated that more than 200,000 pets were displaced, and the majority of those pets were never reunited with their families. “Caring for pets during disasters is a way of caring for people,” Dr. Lowery says.

The need for aid – and the potential to reunite families with lost pets – endures after the disaster is over, as well. “After the Moore tornado, several stray cats brought to the city shelter were still not claimed after a month,” Gardner recalls. “We selected about a dozen stray cats and brought them to Tulsa for adoption. We routinely scan adoptable pets for a microchip. One of the cats had a chip!”

She adds, “We called and a very shocked and excited family answered the phone. The cat had been lost during the storms. The owners drove two hours and arrived at our facility first thing the next morning. They were crying, our staff volunteers were crying … it was one of the most rewarding and special moments from our Moore experience.”

To learn more about disaster preparedness and safety, as well as the Hill’s Disaster Relief Network, visit the Hill’s website at www.HillsPet.com/PetPrepared.

5 essentials for your best summer yet

5 essentials for your best summer yet