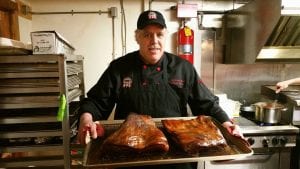 Michael Flies, the owner and executive chef of Billtown BBQ, sits across the table and sips on a soda. He has a big gentle presence and a thoughtful face. As he talks, his eyes, which are framed by long lashes, give away his genuine enthusiasm.

“I grew up here. This is where my roots are and I’m trying to stay true to that,” he says as he looks out at two fellas having lunch. A few minutes later, they swing by the table on their way out and tell him the food was very good.

Flies smiles, nods, and thanks them.

He then explains “I’m trying to cater to the local people and keep everything as affordable as possible to maintain that base.”

Although Billtown BBQ has been in business for only five months, Flies has been in the food industry for twelve years. Plus, BBQ is familiar. Flies, who grew up in Williamstown, also grew up with a family that smoked their own meats.

Flies explains that BBQ is not “something you can do on the fly. Everything takes hours. You can’t just throw it together.” Yet, despite the amount of time that goes into making the BBQ, it leaves the building quickly, in what Flies predicts is 75% takeout.

Flies joined the military fresh out of high school. After fourteen years, he returned home and decided he was ready for school. He had looked into the New England Culinary Institute (NECI) after he graduated high school but knew that he just wasn’t ready. Coming back in his thirties on the other hand, with a long military career behind him, he knew he had the skills needed to be successful.

Then, after Flies graduated with his bachelor’s degree, he wanted to put his education to good use. At the time, his kids were in the local school system. When they came home, he would ask them what they had for lunch. Their answers were usually disappointing. He thought perhaps he could make a difference by getting more local ingredients and more meal variety onto the tables. It didn’t take long to realize how many regulations were involved and just how difficult that would be.

An unexpected surprise, on the other hand, was how much he enjoyed working with the students. Then, after he had the opportunity to teach a culinary class in Randolph, he really realized just how much he loved it. When the class ended, he applied for a teaching job.

Flies did not get the teaching job. But it does not seem to change how he feels about teaching. His entire face lights up as he talks; he can’t stop smiling. When asked what he enjoyed most about it, he explains “Just seeing them learn.”

He says he “absolutely loved” teaching multiple times. And, as many teachers know, the drive to educate comes from a genuine love for the subject. It was then, after he finished teaching the class in Randolph, his wife Donna and he decided to channel that love for culinary arts into opening their own restaurant.

When asked how running Billtown compared to his previous jobs in kitchen management, Flies replies “being a business owner is 100% different.” He has had to put in longer hours, and his responsibility is 24/7. But he credits his stamina, commitment, and work ethic to his military background and his experience growing up on a farm.

Flies wants his BBQ to be known as classic New England BBQ. What makes it New England? Although some concepts are taken from other classic BBQ styles (think Texas or Memphis, for example), Flies uses maple as his main sweetener. It goes into his rubs and his sauces. And it comes -you guessed it- from his own family’s maple trees. Another New England trait? Using what you have. Aside from his list of New England based venders, Flies also uses chickens and pigs that he raises himself.

Making food, being a part of the community, hopeful for a future that involves teaching… If you ask where’s the rub, you’ll find it on a good slab of brisket.

Vote For Vermont: Should Wind Tower Projects Be Part of Act 250?