When Facing Your Fears Takes Off

When Facing Your Fears Takes Off 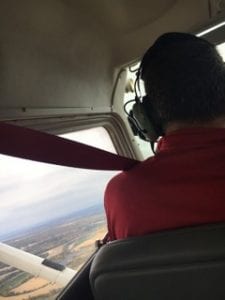 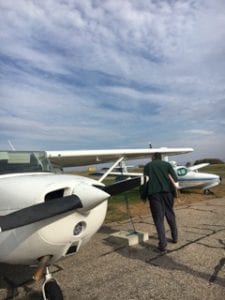 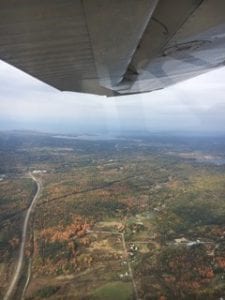 When David Brody, an internal medicine doctor in St. Johnsbury, Vermont, stepped toward the woman he was about to marry on the pink sands of Eleuthera, Bahamas, he was moving forward in more ways than one. Getting from St. Johnsbury to Eleuthera required two separate flights: one from Boston to Nassau and a puddle jumper to the

tiny island of Eleuthera. Although David had flown a handful of times as a child, he had developed a severe airplane phobia as an adolescent. Prior to the Eleuthera trip, he hadn’t flown in over thirty years.

Today, however, David takes flying lessons at the Vermont Flying Academy in Burlington, Vermont. He credits his decision to tackle his nearly crippling fear of flying to the support and encouragement of his then-fiancé, now wife, Annamarie Sloss. She had been the one who had wanted to wed in the Bahamas, and she had promised to hold his hand during takeoff.

In preparation for the trip to Eleuthera, David began reading about the history of flight. Fascinated, amazed and still terrified, he arranged to take a sort of test flight with a friend in a small two-seater. His thinking: if I can do this, I can do anything.

After David and Annamarie returned home to Vermont, David decided to no longer shy away from travel involving flight. They flew back to the Bahamas a couple of times, as well as to the Carolinas. And somewhere along the way, David decided he was going to conquer his fears and embrace his newfound enthusiasm for flight. And so he signed up for a Discovery Flight through the Vermont Flying Academy.

The Discovery Flight is not simply for sightseeing, but actually putting one in the pilot’s seat. David describes the cockpit as “a very small place indeed – just large enough for the immediate need at hand; and once strapped in, there is a definite ‘no way out feeling.’ But in a sort of daze of denial and determination,” he continues, “I fought down the fear and, furiously chewing gum (I had heard it helps with nausea – it doesn’t) off we went. It was quite a flight – rather gusty conditions – but there was a spark of joy and thrill.”

David describes his first lesson as “surreal.” He felt a mixture of excitement, anxiety, queasiness, and disbelief- but ultimately pride in his accomplishment. He explains that “a well-executed banked turn has to be one of technology’s most exquisite feats – and there I was, soaring over the Champlain Valley like a hawk! At the end I was drained, but lighted.”

Learning how to fly requires one to learn a new way to experience space. David explains that “almost everything one knows about getting from here to there in two dimensions does not apply in flight and one needs to learn a new and often counter-intuitive paradigm of locomotion.” It’s a new way of orienting oneself, and a new way of moving forward.

One large and unexpected challenge David is currently tackling is a battle with air sickness. Many new pilots are affected by it, but it usually dissipates over time. His, however, has not. “Oddly enough,” he elaborates, “the anxiety has been less of an issue. When I’m up at 3500 feet, I am focused on the technical task at hand.” Still, he has moments when something unexpected happens, and he feels “the cold hand of fear grab hold.” However, he has come to understand that the more you know, the more you realize the plane won’t just fall out of the sky.

As the essayist Anais Nin says, “life shrinks or expands in proportion to one’s courage.” Facing a fear is empowering; it can have surprising consequences. It can introduce you to new experiences, new people, and even a new you.

When asked where David hopes flying will take him, both literally and figuratively, he explains that it is about the journey, not the destination: “I have set this goal for myself, to obtain my pilot’s license, and that is my focus. But looking ahead I have toyed with the idea of eventually purchasing a small plane. It would certainly be a fun and adventurous way to go on family vacation – or to just spend an hour amongst the cumulus clouds chasing a sunset.”

A Salute to Veterans in Barre’s Elmwood Cemetery

A Salute to Veterans in Barre’s Elmwood Cemetery