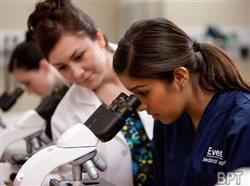 Children learn by doing, and every child has a unique learning style all his or her own, child development experts tell us. The same can be said of adults if a recent survey is any indication. A majority of Americans say hands-on training is the hands-down winner when they want to learn something new in an educational environment, according a Harris Interactive poll conducted on behalf of Everest College.

Surprising in the Internet age when most Americans spend hours a day online, 52 percent of the 1,011 adults polled said active participation through hands-on training was the best learning method, while just 19 percent counted using the Internet as a preferred learning tool. Watching a demonstration by an instructor came in a distant second at 28 percent, and just 15 percent valued watching videos.

“When it comes to what learning methods work best, everyone is different,” says John Swartz, regional director of career services at Everest College. “Clearly, most Americans feel hands-on training works best for them. For our education system to succeed in preparing Americans for the working world, it’s critical for us to understand what learning styles work best for all students, whether they’re pre-K kids or older Americans returning to school for advanced training.”

With college costs continuing to increase and competition remaining high for available jobs, both high school graduates and working professionals seeking to further their careers through advanced degrees recognize the importance of finding the right educational program for their learning style.

“Students who practice what they’re learning in a hands-on environment can often retain much more information when compared with sitting passively in a lecture room, so it’s not a surprise that hands-on training is the overwhelming favorite,” Swartz says.

Other variables play a role in determining an adult’s preferred learning style, the survey indicates. While both sexes preferred hands-on training overall, men were significantly more likely than women to say hands-on training worked best for them. Women were significantly more likely to say visual demonstrations worked best for them.

Top earners also liked the Internet; 30 percent of those with household incomes topping $ 100,000 said the Internet worked best for them as a learning tool, while just 18 percent of workers earning less than $ 35,000 agreed. Twenty-eight percent of Americans ages 45 to 54 chose reading from a text book as their top method.

“It’s no secret that students in the U.S. are falling in the rankings on global achievement tests, so it’s imperative that we invest in early education, retain the top educators, and identify the best forms of training programs and learning methods to prepare future generations,” Swartz says. “One of the major benefits of tactile learning, or hands-on training, is that it develops critical thinking skills that give students the ability to make on-the-spot decisions in a workplace environment.”

Seasons change, so do asthma triggers

Seasons change, so do asthma triggers