Many thanks to the 329 Waterbury citizens who responded to the Town Meeting survey. This was the second highest return in the county. There were over 40 written comments. Some are listed below.

“Education should not be on the backs of property owners. It should be based on income – the current way of funding education is unfair and unsustainable.”

“Vermont now has the dubious distinction of being in the top 10 states with the highest taxes. I am retiring in the next 3-4 years and will not be able to continue to live here.”

“The legislature is dropping the ball by not passing stricter laws regarding smoking.”

“The primary goal of changes to health care should be to simplify. Every new rule or law should replace a greater number of same. The more we need it, the more complicated it gets!”

“Would arson, embezzlement, fraud and grand larceny be considered non-violent? Could we assume selling drugs is not evil enough to qualify for jail time?”

“All drivers in accidents should be tested for opiates, marijuana, alcohol and benzodiazepines.”

“I believe Vermont is a very expensive state to live in, and we do not make enough money for as hard as we work. Something should change, as people are moving out of state just to be able to live and not have to borrow from Peter to pay Paul.”

“Let’s pass the plastic bag law. Too much plastic in the world. We’re leaving our grandchildren a mess to clean up as it is.”

“More research on the future development of condensed wind turbines before erecting more monsters that devalue property and tarnish ridgelines.”

“My concern is for the growth of for-profit “sober houses” that are invading our state to house addicted individuals but are not regulated and have no oversight, and programs to help the housed individuals.” 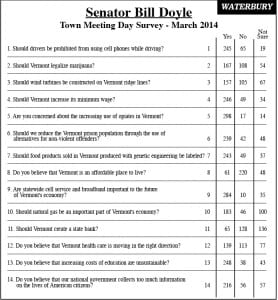