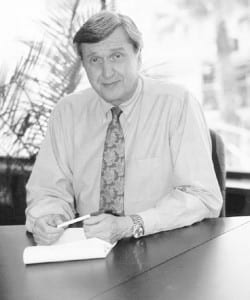 Ken Squier and radio station WDEV AM & FM in Waterbury have been selected to receive the Matthew Lyon Award for their lifetime commitment to the First Amendment and the public’s right to know the truth in Vermont.

The Vermont Press Association, which represents the interests of 11 daily and about four dozen non-daily newspapers circulating in Vermont, will honor Squier and the radio station at its annual awards banquet on Thursday, Dec. 12, 2013 at the Capitol Plaza in Montpelier.

Squier, along with Vice President Eric Michaels, News Director Lee Kittell and the radio station staff have been on the front lines in seeking greater public accountability through a range of programs and community efforts, VPA President Maria Archangelo said.

“WDEV is one of the few remaining fully live radio stations in Vermont that brings the latest breaking news to listeners as it happens,” Archangelo said.

“This particular award means a lot to WDEV and me having come from our peers on the print side of news coverage,” Squier said when informed about his selection.

“There is no question that Eric, Lee and others have done what we feel was necessary to carry on a tradition that goes back to when the station went on the air in 1931.”

Archangelo said news and public affairs have always been important to Squier who insists on “Live and Local.” The station has been on the air for over 80 years and can be heard throughout most of Vermont and into portions of New York and New Hampshire.

Archangelo noted Squier, the president and CEO of the Radio Vermont Group, also has been a driving force in Central Vermont for literacy programs to ensure all Vermonters can read. He was a long-time member of the board of directors for Central Vermont Adult Basic Education.

“Ken has been a firm believer that Vermonters must read, hear and see if they are to be informed citizens,” Archangelo said.

Squier and WDEV help encourage listeners to read local newspapers in detail through the timely radio feature – created and hosted by Michaels — called “Conversation with the Editors” which features several leading newspaper editors discussing major stories in their publications.

Squier also is insistent on the highest ethical efforts by his staff in the presentation of news, including balance and proper attribution. While many electronic media outlets often read the morning newspaper on the air without any proper attribution or acknowledgment of the copyrighted material, WDEV is well-known for stating whether the station generated the story itself or which Vermont newspaper a story came from.

Several times over the years Ken Squier and other broadcasters have joined with the Vermont Press Association in fighting for First Amendment issues. These included seeking cameras and recordings in Vermont courts, fighting proposed advertising taxes on local businesses and most recently a proposed legislative effort to ban hospitals from advertising their services to consumers.

Squier and WDEV have reputations for placing listeners and viewers in the center of news – whether it is airing important events live or clearing all programming to provide around-the-clock coverage for natural disasters or major events, like Tropical Storm Irene.

While many people his age are enjoying retirement, Squier is having too much fun to slow down. He goes to work every day at WDEV, which was co-founded by his father, and still provides irreverent commentary on the world of sports – and sometimes politics — each noon and late afternoon.

“It’s a station where Vermonters have a conversation among themselves. The connection between the station and the listeners is legendary,” Archangelo said.

Squier has been honored with numerous awards, been inducted into a handful of Halls of Fame and was named the 2007 Citizen of the Year by the Vermont Chamber of Commerce. The Waterbury native is a graduate of Boston University and lives in Stowe with his wife, Elizabeth. He is active in various groups, including as a past chairman of the Vermont Symphony Orchestra.

The Vermont Press Association established the Lyon award to honor people who have an unwavering devotion to the five freedoms within the First Amendment and to the principle that the public’s right to know the truth is essential in a self-governed democracy.

Previous Matthew Lyon winners include Patrick J. Leahy for his work as a state prosecutor and U.S. senator; Edward J. Cashman for his efforts as Chittenden Superior Court clerk, a state prosecutor and state judge; Robert Hemley, for his many successful fights as a lawyer to keep courtrooms open and court files available to the public; Gregory Sanford, state archivist, for his work in maintaining, restoring and saving government records for public access, and H. Allen Gilbert, executive director of ACLU in Vermont for fighting for greater public access to government records and for public disclosure about police misconduct.

Stumped for a gift idea? Give the power to change the world

Stumped for a gift idea? Give the power to change the world