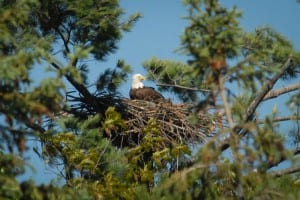 Bald eagles in the state had a very good nesting season in 2013, according to a report from Vermont Fish & Wildlife Department and Audubon Vermont. From 16 known nests, Vermont’s bald eagles produced 26 fledglings, or offspring that survived to leave the nest. This is an increase from 2012, when 24 fledglings were produced.

“Not all bald eagle nests are successful every year,” said John Buck, migratory bird biologist for the Fish & Wildlife Department. “Late winters, food shortages, or even the nest tree falling down can cause a nest to fail. Despite the potential for these natural setbacks, Vermont still experienced a net increase in eagles fledged this year, which is very encouraging.”

Buck urged Vermonters to appreciate eagle nests from a distance. “Bald eagles at nest sites are very susceptible to disturbance, so giving eagles their space while they’re nesting is one of the best ways Vermonters can help these birds during nesting season.” Bald eagles are no longer a federally endangered species, but they are still listed under Vermont’s Endangered Species Act.

Other bird species monitored by the department and its Vermont partners fared well this nesting season. Common loons and peregrine falcons, which were removed from state endangered species lists following years of stable populations, both posted high numbers of offspring.

Two endangered bird species, the black tern and common tern, also had successful nesting years. “Black terns nest on grassy mud flats, using logs, mats, and other floating platforms to stay above water level,” said Buck. “This allowed them to cope with the challenge of a sustained rise in Lake Champlain water levels during May and June.”

“The return of these amazing bird species to Vermont is one of the state’s great conservation success stories,” said Buck. “These species have continued to thrive thanks to the efforts of our conservation partners and the citizens of Vermont.”

Vermonters can help researchers in their effort to conserve birds by donating to the nongame wildlife fund on line 29 of their tax return or at www.vtfishandwildlife.com, or by purchasing a conservation license plate.

Some Important Facts About Literacy