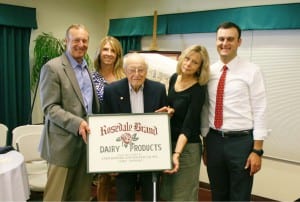 Bob Davis doesn’t view his lifelong passion for dairying as anything special. As he told WDEV’s Mark Johnson, in a recent interview, “I was just doing my job!”

You see, Bob is a very modest fellow who finds it difficult to confess that it was his management and technical skills that were responsible for transforming the Cabot Cooperative Creamery from an obscure struggling local milk processing operation into the iconic Vermont dairy brand it is today. Most probably, it was this unpretentious Vermonter’s love of agricultural traditions and his lifelong passion for excellence that lead the nominating committee of the Vermont Agricultural Hall of Fame to select Robert (Bob) P. Davis for their prestigious award this year.

Robert P. (Bob) Davis was born in Morrisville in 1919. After the death of his father, young Bob went to work at a local farm to help his mom out with the family expenses. It was there that he discovered a love for forestry and sugar making, while helping with the farmer’s springtime sugaring. After his high school graduation, Bob attended the University of Vermont’s Agricultural School, studying Dairy Manufacturing and Forest Management.

Bob graduated in 1941 and immediately joined the U.S. Army as our nation became engaged in World War II. Bob served in the Army Medical Corps, first at Walter Reed Hospital in Washington, D.C.; then in the Europe as Operation Dragon attacked the Nazi occupiers in Southern France; later in Belgium and Germany before being transferred stateside in 1945. He was discharged from active duty in 1946 and joined the Army Reserves where he continued to serve until 1953, retiring with the rank of Captain.

Returning to his home in Vermont in 1946, Bob went to work for the United Farmers Co-operative in Morrisville as Plant Manager, and in 1948 he was recruited by the Whiting Milk Co. as their Regional Manager.

In 1952, the Cabot Creamery was struggling – financial problems, inadequate record-keeping and poor quality control had placed the co-operative at odds with state and federal regulators. As the Cabot Cooperative board sought to resolve their overwhelming difficulties, they were fortunate to recruit Bob Davis as the new Plant Manager. Bob immediately went to work correcting the deficiencies both in the plant and at the member farms. Bob brought new dairy processing techniques and organization skills to the creamery.

Through his efforts, Bob was able to quickly improve the standards at the creamery to the satisfaction of both state and federal officials. Bob set up a laboratory in the creamery so that quality control test results were available immediately. The idea of having an “in-house” testing laboratory was unheard of at the time – almost every dairy processor would mail their samples to independent (often out-of-state) labs, having to wait days to discover if they had quality “issues.”

During his many years at Cabot, Bob directed constant improvements in processing and implemented new innovative marketing strategies – including the development of the branding of “Vermont” white cheddar in collaboration with his son, Bill. The quality reputation Cabot enjoys today can be directly traced to Bob’s tireless dedication and skilled management of the creamery. When Bob retired from Cabot in 1985, after over 30 years of service, his son, Bill, who had first come to work with his dad after school and in the summertime while in high school and attending UVM, was chosen as his replacement as General Manager and CEO at Cabot.

After retiring from Cabot, Bob and his wife, Barb, continued to run their Maple Glen Farm which they had purchased in 1977. Bob and Barb enjoyed tending to their 85 Jersey “ladies” on the farm in Cabot. Additionally, they operated a 7,000 tap sugaring operation which was more a family activity than just hard work. In the springtime, the sugar house became the centerpiece of family activities as children, grandchildren and friends would join them in the Vermont tradition as they gathered sap. Bob exclusively used buckets and gathering tanks to collect their harvest as he believed the newer technique of line gathering, while easier and more efficient, sacrificed quality in process. Sap boiling was left to Bob – the master of the evaporator – while the family packaged the sweet reward of their efforts, feverishly working to keep up with Bob’s production. Bob and Barb sold Maple Glen Farm in 1989, though they continued to enjoy their springtime sugaring for many years.

This summer the Vermont Agricultural Hall of Fame nominating committee announced that Bob Davis was among the five venerable Vermonters chosen for induction this year. The ceremony, which was held as part of the Champlain Valley Fair, was well attended, and Bob seemed to revel in his notoriety and the attention lavished upon him by friends and family. At 94, Bob’s pace has slowed a bit, but his knowledge and keen wit are as sharp as ever and he was very much in his element as he met and chatted with fellow agriculturists, politicians and the press at the event.

Congratulations to Bob on receiving this well deserved award and kudos to the VT Agricultural Hall of Fame for choosing Robert P. Davis as a worthy recipient of this prestigious award.

Life after stroke: Advice for physical and emotional recovery

Life after stroke: Advice for physical and emotional recovery