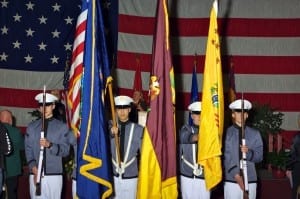 Photos and story by Bill Croney

It took a long time, 41 years to be exact, but Vermont’s Vietnam veterans have finally received an official “Welcome Home.”

On Friday, March 28th the Vermont Legislature read a Concurrent Resolution saluting the Vermonters who served in the Vietnam War (7,236) and honored the memory of those Vermonters who died in the conflict (100). Saturday, March 29th marked the 41st anniversary of the end of the Vietnam War and on Sunday, March 30th, nearly 250 Vermont Vietnam veterans gathered at Norwich University’s Plumley Armory to take part in a “Vietnam Veterans Welcome Home Day” ceremony sponsored by the Vietnam Veterans of America Vermont State Council.

Perry Melvin, a former Navy corpsman and the president of the Vermont Council, was one of the main organizers of the event and he described just what went into getting things ready for the event and how it was structured.

“Right now (at 3pm) we’re getting things ready for the veterans to come in. We have our exhibitors set up for them to view and maybe get some information or some help from one (or more of them) until about 4pm, and then we start the official ceremony with the speakers and the reading of the resolution that the Legislature passed on Friday. For the first hour the veterans can just wander around the floor and meet with other veterans for conversations and/or listen to the period music provided by Green Mountain Sound. After the speeches we will have an hour of period music (60’s and ‘70’s only) and dancing. We hope the veterans can mix and converse with other veterans and enjoy the homecoming that they deserve.”

Melvin noted that the event was put together in a hurry. “We found out about the proclamation just three weeks ago. We have been running hither and you because it’s important that we have something up this way to honor our veterans. They did a small presentation down in Bennington yesterday (Mar. 29th) but we wanted to do something in the northern part of the state. We talked to a couple of places but Norwich has always been veteran friendly, this facility is fabulous and they have bent over backwards for us. We feel it is the right place to have it. We want the vets to think about the good times rather than the bad times and enjoy the homecoming they never got back then,” Melvin said.

The formal part of the ceremony, which was emceed by WDEV’s Jack Donovan, featured short speeches by representatives from each member of Vermont’s congressional delegation and by Governor Peter Shumlin. All the speeches at the formal ceremony seemed to have a recurring theme: “It’s been a long time, welcome home.” “We want to recognize your service.” And, “It’s necessary to separate the Warrior from the war.”

John Tracy, from Esssex, was representing Senator Patrick Leahy at the event. And he was easily recognized by the black Cavalry (229th Cav. Vietnam ’71-72) hat that he was wearing. “It’s part of the legacy of the Vietnam veterans that we now thank the veterans for their service. The men and women that engage in those activities should be welcomed home. We all had individual welcomes home but the collective welcome by the State of Vermont is heartwarming. You can see it in the veterans here today,” Mr. Tracy said.

One of the highlights of the formal part of the “Welcome Home” ceremony was the reading of the legislative resolution by Gold Star Mother, State Representative Vicki Strong.

For many of the veterans present it was a very emotional experience. Richard R. Gray, American Legion Commander, Department of Vermont, (figuratively) put on his Vietnam veteran hat (U.S. Army, Vietnam ’69-’70) and said as he fought back tears, “I think that it’s inspiring that (the state legislature) they took the time to recognize us. I hold no animosity over the years over it but it’s 41 years later. I also lost a brother in Vietnam so this has a special place in my heart. I was there (at the State House) for the reading on Friday. It’s not just a Vermont thing. It’s a national thing,” said Gray.

Russell Bibens, Commander of the Veterans of Foreign Wars (VFW)-State of Vermont concurred with the Legion Commander’s assessment. “Long overdue, a lot of us did our part for this country in the 60’s and 70’s. I was proud to wear a uniform when I came home and I couldn’t. I finally feel like I’m welcome home after 41 years. It’s a great thing,” he said.

The “about time” comments abounded among the veterans present and so were the stories of not being very welcome when they came home. “I flew into Boston to visit my grandparents (May’70),” said Richard Gray, “and my grandmother went out and got me some civilian clothes because she said Harvard Square was besieged by protestors and she didn’t want me getting hurt.”

Michael Choquette, of Montpelier and Commander of VFW post # 792 had similar experiences. “ I remember in ’73 we had to take our uniforms off because they were afraid we would get mugged in airports and bus stations, so a lot has changed in 41 years,” he said. “I was there (U.S. Navy) near the end of things and I can only imagine what it was like for the guys that were there long before I was.”

It took 41 years but Vermont Vietnam veterans finally have an official “Welcome Home!”

Learning on the go: How digital learning can help you understand any topic instantly

Learning on the go: How digital learning can help you understand any topic instantly