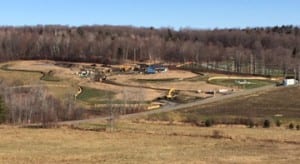 The Vermont Veterans Memorial Cemetery in Randolph Center, already acclaimed as one of the nation’s most beautiful and inspirational veterans cemetery, is undergoing a major expansion that should be completed by late fall.

The cemetery opened in 1993 and according to Robert Burke, Director of the State of Vermont Office of Veterans Affairs in Montpelier, is currently almost 80 percent full.

In an update on Jan. 15 of this year, it was pointed out that “at our current rate of burials it is projected our developed plots would be filled during the 2018 burial season.”

An application by the Cemetery Advisory Board and the Office of Veterans Affairs, and Buildings and General Services, along with an 100-year Master Plan for the entire scenic 110-acre cemetery, was started in 2012 and in 2014 was approved by the National Cemetery Administration in October of 2014 along with a grant of $4,570,000 that eventually increased to $5,695,359 in July of 2015.

“The grant will allow for year-round operation of the cemetery,” notes Burke, explaining that it is now only open May through the first week in December.

Also, the new road system will more directly connect visitors to the beautiful chapel and allow a secondary exit from the site, states Burke.

A kiosk will be at the Public Information Center to show where everyone is interned, which will greatly help visitors.

Tricia Harper, the Veterans Cemetery Project Manager for the State Buildings and General Services, says the Phase 1 project, which started in August, is going well and no major delays are expected.

“She really has done an exceptional job,” on this project, believes Burke, who notes there are many ledges under the large trees and rolling hills. “No blasting allowed—just hammering.”

This cemetery is truly a special place and when Phase 1 is complete this year it will even be more so, believes Burke. “A real tribute to our veterans and their loved ones.”

The Vermont Office of Veterans Affairs is located at 118 State St. in Montpelier. Its phone number is 802-828-3379 or go online at www.veterans.vt.gov. -GH