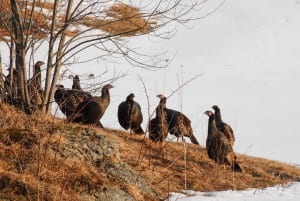 Vermont wild turkey hunters had safe and successful spring and fall hunting seasons in 2013, according to the Vermont Fish & Wildlife Department.

A record 6,968 turkeys were taken by hunters during Vermont’s three hunting seasons – the spring youth hunt, the regular May spring season, and the fall turkey hunt.

Young turkey hunters mentored by experienced hunters took 782 bearded turkeys, which are almost always males, during the youth turkey hunt on the weekend before the regular spring season.

Fall turkey hunting during October and November produced 606 turkeys of either sex, which was lower than 2012, but still enough to make the 2013 three-season total the highest since Vermont’s wild turkey population was restored in the early 1970’s.

Vermont’s wild turkey numbers increased to an estimated 45,000 to 60,000 turkeys in the fall 2013 population, allowing the expansion of turkey hunting opportunities which now offer hunters the chance to take three turkeys each year statewide.

“I am pleased that we were able to hire Amy to take over management of one of our premier big game animals is Vermont,” said Wildlife Director Mark Scott. “She brings more than eight years of experience working for the department on a variety of wildlife species.”

“Hammond’s been our lead biologist the past few years on turkeys and has done an excellent job building relationships with Vermont’s sporting groups and the state’s various National Wild Turkey Chapters in promoting youth hunting and volunteers,” said Scott. “The National Wild Turkey Federation is a key reason for our success in establishing this big bird throughout the Green Mountain State.”

Hammond will be focusing more of his work on leading Vermont’s black bear project.