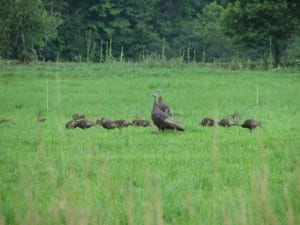 Wild turkeys are found throughout most of Vermont, but their reproductive success is monitored annually by the Vermont Fish & Wildlife Department with a little help from “citizen scientists” who report the number and size of turkey families they see during August.

Fish & Wildlife is again asking the public for help. If you see a group of young turkeys in Vermont during August, the department wants you to go to the turkey brood survey on its website (www.vermontfishandwildlife.com) where you can record where and when you observed the number of adult and young turkeys, or poults.

“Data gathered from the survey will help establish long-term trends in turkey reproductive success and recruitment,” says Vermont Fish & Wildlife’s turkey biologist Amy Alfieri. “It will also answer questions about the impacts of spring and winter weather on the survival of poults and adult turkeys, which helps in setting turkey seasons and harvest limits.”

“We monitor Vermont wild turkey numbers annually in order to maximize the benefits of having turkeys while minimizing the liabilities,” says Alfieri. “Turkey hunting is a mechanism for managing Vermont’s turkey population within these limits.”

More than 5,100 wild turkeys were taken by hunters in Vermont’s 2014 spring hunt. Alfieri says this is less than last year’s record spring hunt total of 6,362 turkeys likely due to poor poult production caused by extended wet weather and harsh winter conditions in some areas of the state in 2013.

“Last year’s low poult production may result in fewer hens and fewer poults this year,” she said. “Combined with the harsh winter we just had, I am not expecting to see large numbers of birds this year. The online survey will help us get a snapshot of turkey production throughout the state.”