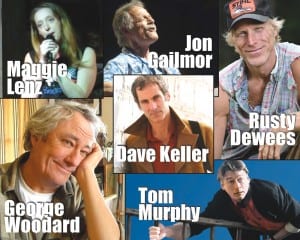 By Aaron Retherford
You’ll be hard-pressed to find a larger gathering of talented performers in Vermont than when Lost Nation Theater puts on its third “LNT-Aid” extravaganza at 7:30 p.m. Thursday night at Montpelier’s City Hall.

This is an event not to be missed.

“It’s really fun. The first year we did it the feeling in the room was incredible,” LNT Producing Artistic Director Kathleen Keenan said. “It was just really special, very humbling to feel that much support all at one time. It is our main fundraiser, and we can make a significant sum in one night.”

The inaugural LNT-Aid in 2014 raised nearly $9,000 for the theater company, and the fundraiser is necessary to help maintain a community treasure. Keenan said donations have been down this year and attendance fell off a little bit in the fall – possibly due to the election. LNT-Aid will help keep LNT going through the winter in order to continue the theater’s valuable contributions to the central Vermont community. LNT has big plans as it celebrates its 40th birthday next year.

However, that’s just a portion of the performance side of the company. There are also one-week and two-week children’s theater camps that culminate with their own productions. The camps teach theater skills across various disciplines.

In all, around 12,000 people attended LNT offerings this year. That’s 12,000 unique and personal experiences where attendees can escape reality for a short time, while being transported into a whole new world. For some, that might be exactly what they need this week.

“Not to get too political, but I think that’s a reason it (LNT-Aid) will be a good time,” Keenan said. “For anyone whose heart is breaking over the election results and what those results might say for our country, here’s an opportunity to come together as a community and celebrate those things that unite us. To celebrate an art form that can help us walk in other people’s shoes and allows us to have empathetic experiences. That lets us travel via our imaginations into other worlds and experiences, that can start community conversations; and all the while having these consummate performers showcase their talents in support of that.”

But concertgoers won’t just get a great show Thursday night. In addition to performing, DeWees will also show off his auctioneering skills, offering a few prize items such as getaways, ski passes, a guitar from Guitar Sam, and more — all to raise money for LNT’s improvements.

LNT applied for a grant to replace the 100-year-old proscenium curtain, which is beyond repair. The new curtain is historically accurate and will be fire retardant for life. With the same grant, LNT was able to invest in a sound system that will be on full display during LNT-Aid as half the acts are musical, including a first appearance by Keller, who recently released a new album. The upgrades are part of a $25,000 project, which is another reason LNT-Aid is returning for a third year.

If that isn’t a big enough motivation to attend LNT-Aid, attendees will witness what LNT is all about at its core as Lenz comes full circle. Lenz was one of LNT’s students and an apprentice when the theater company ran the Montpelier High School Drama program.

“To think of all the kids who have gone to college on a scholarship or partial scholarship, or are off teaching theater now, being technical directors or acting and having careers, that is pretty special,” Keenan said. “It’s interesting to think of what Montpelier or central Vermont would be without the arts. If I was going to look back at what we have done and will continue to try to do, I think that Lost Nation Theater has been a real catalyst and inspiration for a lot of things cultural and other ways in central Vermont.”

If you want to help keep the arts flourishing in central Vermont, give LNT-Aid a shot. For tickets to LNT-Aid and to help out a stellar community theater, call 802-229-0492 or visit lostnationtheater.org.

A cash bar will also be available during the show thanks to Tom Moog of Sweet Melissa’s.