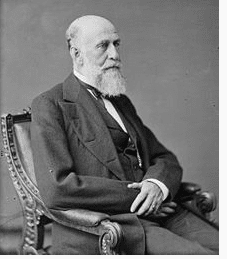 It has been said that Vermont’s greatest export is its people, and this is no less true for its political figures. Vermonters who have served their state in Washington, and the natives who left Vermont and served in other states, have been part of an unusually large group of highly regarded public figures from one of the country’s smallest states.

One such person was Strafford-born Justin Morrill. His political career spanned forty-four years, including six terms in the United States Senate. He angered the South by his sponsorship of the pro-tective tariff in 1861 and is perhaps best known for the Morrill Act of 1862, which established the nation’s land grant colleges. He advocated civil service reform and opposed territorial expansion and the Spanish American War. His position on the war brought him into conflict with Redfield Proctor. He was also influential in helping promote the Library of Congress and the Washington Monument.

Another Vermonter who served with distinction in Washington was George Edmunds from Richmond. Elected four times to the U.S. Senate, Edmunds played a major role in the Hayes-Tilden presiden-tial controversy of 1876. Tilden won the most popular votes in the election, but not enough in the Electoral College. A dispute over the electors’ credentials led to the establishment of an electoral commis-sion to settle the disagreement. Edmunds was the sponsor of the bill setting up the commission. Many felt that the establishment of the commission helped avert another Civil War. For his efforts, Edmunds was honored by the Republican conventions of 1880 and 1884 by having his name placed in nothination for the presidency.