Hoeing Out, and other Signs of Spring 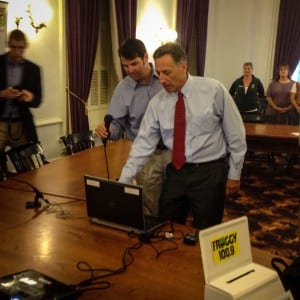 The winners of Vermont’s 2013 moose hunting permits were determined Thursday, August 1 at a lottery drawing in Montpelier.

The drawing is done by a random sort of applications that were submitted by a July 5, 2013 deadline.  Lottery applications cost $10.00 for residents and $25.00 for nonresidents.

As part of the regular lottery drawing, a “special priority drawing” was held for five permits to go to applicants who have received, or are eligible to receive, a Campaign Ribbon for Operation Iraqi Freedom or Operation Enduring Freedom (in Afghanistan).  The unsuccessful applicants from the Iraqi-Afghanistan drawing were included in the larger regular drawing that followed.  All applicants for both drawings who did not receive a permit were awarded a bonus point to improve their chances in future moose permit lotteries.

The lottery was held for 50 moose permits to be used in the Vermont’s October 1-7 archery moose hunting season and 355 moose permits for the October 19-24 regular moose season.

“Today’s lottery drawing helps celebrate one of Vermont’s successes in science-based wildlife management,” said State Wildlife Biologist Cedric Alexander.  “Vermont’s first moose hunt was in 1993, when 25 moose were taken with 30 permits issued.  We expect close to 200 moose will be taken this fall in a carefully regulated hunt.”

Winners in this year’s moose hunting lottery are posted in a searchable database on the Vermont Fish & Wildlife Department’s website (www.vtfishandwildlife.com.  Click on “Hunting and Trapping” and then on “Lottery Applications and Winners.”

If your name wasn’t drawn, you can still bid in Vermont’s auction for five moose hunting permits, which is open until August 21.  Sealed bids must be received by Vermont Fish & Wildlife by 4:30 p.m. that day.  Contact the Vermont Fish & Wildlife Department to receive a moose permit bid kit.  Telephone 802-828-1000 or email (fwinformation@state.vt.us.

Natural, balanced and beyond: Making sense of dog food labels

Natural, balanced and beyond: Making sense of dog food labels