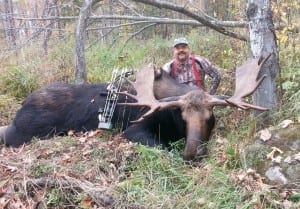 “A preliminary count shows that by October 28 the department had received official reports of 22 moose being taken by 54 hunters in the archery season and 147 moose taken by 289 hunters in the regular season,” said Cedric Alexander, Vermont’s moose project leader. He said a few additional reports may still be sent in from other reporting agents.

“Vermont’s moose population is being managed scientifically, according to a plan developed on sound wildlife biology and input from the public,” said Alexander. “The overall regular season hunter success rate reported to date is 51 percent, down slightly from 54 percent last year.”

Of note, for the second year in a row, biologists who surveyed for winter tick larva on harvested moose found them much reduced. Tick loads were 41percent lower than last year, perhaps due to a late snowpack last April. These reduced loads should help moose come through this next winter in better shape than in previous years.

After applying for more than 22 years, Kevin Rice of South Pomfret, Vermont finally received a moose permit and maximized his rare opportunity to harvest a moose. Using his hunting knife and black spray paint, Rice fashioned a cardboard cow moose decoy from a refrigerator carton.

On opening morning of the archery season Rice and his hunting partner, Steve Schaefer, of Hartford, tried using a moose call with no luck. But later that morning a huge bull moose Rice had previously seen while scouting saw the decoy and came running straight in.

“He was swaying his antlers from side to side, grunting and drooling,” said Rice, who stood up and drew his bow when the moose was 15 yards away. “He kept coming, anyway,” Rice remembers. “My opportunity for a good shot came when he was just seven yards away.”

The dressed moose weighed 919 lbs. with an antler spread of 52 inches and was easily the largest bull moose ever taken in a Vermont archery season and the 15th biggest of all moose taken since moose hunting started in 1993.

“All the effort was worth it,” said Rice. “We have a freezer full of delicious moose meat, and it truly was a hunt of a lifetime.”

A final report on Vermont’s moose hunting season will be available in January when all of the 2014 data have been received and reviewed.