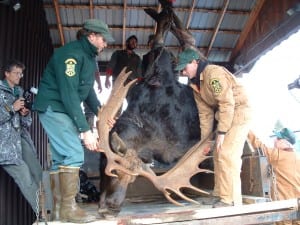 The Vermont Fish & Wildlife Department reminds moose hunters with permits for the October 18-23 moose hunting season that if they take a moose, they must bring it to one of the five designated biological moose reporting stations within 48 hours.

“We strongly suggest you report your moose as quickly as possible in order to protect against meat spoilage,” said Cedric Alexander, Vermont’s moose biologist. “We will be operating biological moose check stations only during the October 18-23 season from 9 a.m. to 7 p.m. at the State Highway Garages in Barton, Island Pond, Middlesex and Londonderry, and at Barnie’s Market on U.S. Route 2 in Concord Village. Weighing scales will be present at all five stations.”

The State Highway Garages are located as follows:

• Island Pond: just west of the village on Route 114

• Londonderry: on Derry Wood Road, one quarter mile east of the junction of Routes 100 and 11

Fall Down Laughing with Vermont Vaudeville!

Fall Down Laughing with Vermont Vaudeville!