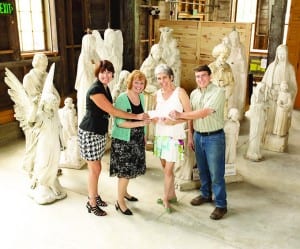 The VGM/SAS, located at 7 Jones Brothers Way in Barre, is a museum and school currently under development. With a 13-member board and a number of volunteers, the organization has plans to create many exhibits on the cultural heritage of granite, while also including exhibits on geology, technology and tools. Exhibits under development include stone sculpture at different stages of carving and a blacksmith shop.

The VGM/SAS site is housed in the former Jones Brothers Company shed. The former Jones Brothers Company, a monument granite dealership founded in 1882 in Boston, expanded to include both a manufacturing plant and quarry in Barre. Once considered to be “the largest granite manufacturing plant in the world,” the Jones Brothers Company had over 600 employees and occupied 100,000 square feet of operational space until it closed in 1975. The original 30,000 square foot building is a straight granite shed with two overhead cranes that were originally powered by a dam and turbines from the adjacent river. The building has unique cathedral-like lighting from almost two hundred windows, and is a Nationally Registered Historic Monument. It is also named by the U.S. Department of the Interior as one of “America’s Treasures.”

This summer, concrete flooring was poured in the main section of the building, and new restrooms were installed last year. The next project calls for the installation of a kitchen which will allow the VGM/SAS to hold catered events, fundraisers and community gatherings. The museum’s board members are in hopes that eventually it will attract tour groups, as well as host educational programming for students. For more information about the VGM/SAS please visit www.granitemuseum.org.