Turning a Hobby into a Lifetime of Service

Turning a Hobby into a Lifetime of Service 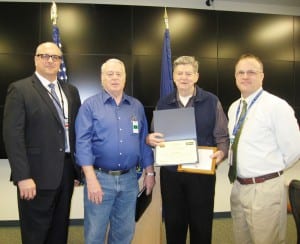 Local ham radio operator Ray Machell was recently recognized for his longtime volunteer service. Machell has used his amateur radio hobby to support Vermont and the nation for nearly 60 years.

Machell became a ham while in high school where he earned his Novice license, his first step to holding the highest class of FCC license, Amateur Extra. At this time a new ham could only use Morse code for the first year. He vividly remembers the sheer joy as a teenager making a 2am contact with a ham station in faraway Washington State from his home in Barre, on a homemade radio transmitter. After high school he became a radio volunteer with the Civil Defense in Barre. In 1954 he joined the National Guard where during his 33-year career, he worked primarily in communications. While not on active duty with the Guard, he worked as the chief engineer at a local radio station.

For many decades Machell has belonged to several organizations of FCC-licensed amateur radio operators, often referred to as hams, which focus on emergency communications. In 1952 the Radio Amateur Civil Emergency Service (RACES) was created to to provide essential communications and warning links to supplement state and local government operations during emergencies. RACES is still active today, and Machell serves as the organization’s project engineer and digital coordinator.

Earlier this month at the Vermont Sate Complex in Waterbury, Machell was awarded a Letter of Appreciation for his work training the National Guard on High Frequency (HF), also known as shortwave, radio operations by Army MARS. He was also awarded a Certificate of Appreciation from the Vermont Division of Emergency Management and Homeland Security (DEMHS) for his longtime service and dedication to the State of Vermont.

Army MARS Region One Director Bob Mims from Taunton, Mass. presented a Letter of Appreciation on behalf of Brigadier General Pater A. Gallaher of the US Army Network Enterprise Technology Command at Fort Huachuca, Ariz., which oversees the MARS program. Machell was commended for training efforts with the National Guard on radio topics including radio field operations, antenna systems, and propagation. He currently serves as the Army MARS Northern New England State Director for Vermont, New Hampshire, and Maine.

Vermont DEMHS Director Joe Flynn and Chief of Field Operations Rob Shell presented Machell with a Certificate of Appreciation for his exemplary dedication and commitment to the State of Vermont. Schell manages the state RACES program. Machell was influential with the renovations of the new Emergency Operations Communications Center at the Waterbury State Complex, installing radio equipment, antennas, and routing endless lengths of coax cable. The technology has come a long way since the 1-kilowatt radio transceiver the size of a desk, used by the state in the early 1950s. Through Machell’s efforts, dozens of MARS auxiliary agency licenses were created for several state agencies further expanding communication capabilities in times of crisis.

MARS was originally called the Army Amateur Radio System but was renamed MARS in 1948 and now includes the Air Force and Navy/Marine Corps as well as the Army. It was implemented in 1925 and played a major role providing communications to outside areas when floods spread havoc across Vermont in early November, 1927. MARS has been long known for providing “phone patches” and “MARSgrams” during Korea, Vietnam, and through the Gulf War. MARS stations made it possible for service men and women overseas to stay in touch with their families back home. With the increased use of cell phones and the internet, the main focus of MARS today is emergency and contingency communications during disasters.

Amateur radio has kept up with changes in technology. Since the 1980s radios have been equipped with digital signal processing which allows communications with a desktop computer. Digital modes allow an operator to send text, images, and even e-mail over the radio.

Using his love of radio for public service has always seemed natural to Machell. “Radio is a magical device,” he says. He and his wife Betty, also a ham and MARS member, live in South Barre.

Legislators to Host Conversation with U-32 and Montpelier School Districts