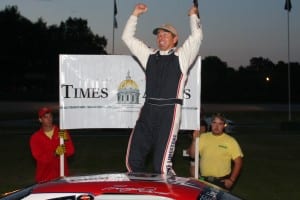 South Burlington’s Trampas Demers snagged the Late Model win during the double-point Times Argus Mid-Season Championships at Thunder Road on Thursday, July 17. Demers came from deep in the field to beat Scott Dragon in the closing laps of the 75-lap event. Demers came from the 14th starting position to claim his seventh career feature win.

Dragon led most of the second half of the event but had to settle for second as Demers beat him by half a car length at the checkered flag. Lance Allen completed the podium. Dave Pembroke and Nick Sweet worked their way from the back of the field through heavy traffic to complete the top five. Josh Demers, Eric Badore, Derrick O’Donnell, Kyle Pembroke and Emily Packard completed the top ten.