Upper Valley Everyone Eats Returns to Gifford in September

“This is the year,” David Santamore exclaims, clasping his hands together and nodding. On August 5th, Santamore will handcycle to the top of Mount Washington. It will be his fourth attempt. He appears tough and wise, so it’s easy to believe him. 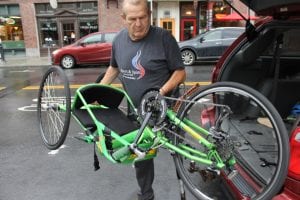 “If the weather holds,” he continues, “this will be the year, and then I can move on to something else.”

Mount Washington is known for its extreme weather. It has had temperatures as low as -50 degrees Fahrenheit and wind gusts as strong as 231 mph (still a world record for wind speeds excluding tropical cyclones). The seasonal average for snow fall is somewhere around 280 inches. That’s over 23 feet. Even in August, the weather is erratic; snow, extreme cold, and brutal winds can easily interfere with a visitor’s plans.

Therefore, tackling the mountain suggests that a cyclist has some deep driving force propelling them forward, carving meaning out of such great difficulty. When asked why he has chosen this particular goal, Santamore leans forward in the chair. “Well,” he starts, pausing for a moment to think. “I think that birthdays are important, and they should be celebrated. And each year, for my birthday, I try to find something challenging.”

Although comically anticlimactic, Santamore is right. The Mount Washington Sunrise Ascent, a fundraiser for Adaptive Sports Partners of the North Country, is both challenging, and it takes place around his birthday.

However, the first time Santamore tackled Mount Washington in 2015, he did not complete it. He was twenty minutes out, around a corner, and could not see the finish when the time limit expired at 10AM.

Santamore describes the journey n as “grueling and slow. It’s about six hours because you’re moving at one and a half, two miles per hour. It’s slower than a walk.” To understand why, it helps to know that the average grade on the auto road is 12%, with extended periods of 18%. The last section, where cyclists are battling some serious exhaustion, is 22%. Plus, there’s occasionally gravel.

“I wasn’t sure what to expect,” Santamore confesses about his first attempt up the mountain. “But if you start something, you should finish it.”

And so, he tried to do just that the following year. But halfway up, the event was canceled due to high winds at the top. “And then last year, the weather was so bad, we weren’t able to begin, it was raining above the tree line, it was 17 degrees with 60-80 mph winds.” This year will be his fourth attempt.

This year, Santamore will be cycling up in what he calls a “kneeler,” a performance bike that has been, thanks to the Vermont Bike Shop, altered to fit his body. One of his legs curls underneath, his foot resting on a sort of plank. He then removes one prosthetic leg and adds a shorter one that ends at knee length. He positions this in front of him, fitting snuggly into the bike. 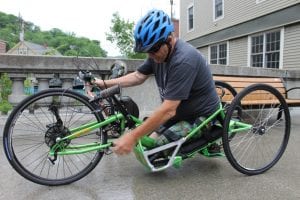 Because the handcycle is lower to the ground and powered using just the arms, it is much slower than a regular bike going uphill. This does not seem to bother Santamore. He quotes country music singer, George Strait: “Life is not the breathes you take but the moments that take your breath away.” Now, surely Santamore will be taking many breaths as he powers up Mount Washington. But the sheer thrill of accomplishing such a feat, no matter how long it takes, is what matters most.

Santamore is very active fellow. He rows. He plays sled hockey and wheelchair basketball. This month he has plans to sail on Lake Michigan and in August, he is going to Colorado with Veterans Adaptive Sports to whitewater raft through Cataract Canyon.

Santamore, who grew up in Barre, has seen many people go to work, come home, eat dinner, have a few beers, and go to bed. They repeated this their whole lives. “They’d work for twenty, forty years, retire and then die. And I thought: I’m not good with that. I want to try something different.” So, he has  tried to enjoy the journey instead of just gazing at the goal.

“Everyone has to have a passion for something in their life at some point,” he says. “Doesn’t matter what it is. To make a better mousetrap. To save the whales. To be on fire for God. Cause that’s life. That’s what makes life worth living. Once they’ve identified that and run with it, then it just opens everything up.”

For example, Santamore has seen some veterans grow despite, and maybe because of the limitations of their bodies. Many of the veterans right out of combat are dealing with traumatic injuries are in their prime. They’re used to being capable of virtually anything. Now, they must relearn their bodies and how to feel in control. Finding success through adaptive sports allows them to them apply that success into other areas of their lives.

“And you come to the realization, if time is not an issue, you can teach anyone to do anything,” Santamore continues. “Cause there’s adaptations to anything. Improvise, utilize, you survive.” 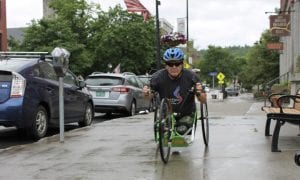 On August 5th, David Santamore will have to be done with his cycling by 10AM. To give himself enough time, he will start at 2:30AM. Per the rules, he will have a couple of people walking with him. Although his bike is set up so that someone can pull or push him should he need it, he plans to make the ascent entirely unassisted. According to Santamore, out of the thirteen athletes, maybe two or three, including Santamore, will be unassisted. Getting up the mountain will take time, dedication, and patience.

“I’m not as fast as a lot of people, but I have some insane endurance,” Santamore laughs. He then ends our conversation with an Einstein quote: “Life is like riding a bicycle. To keep your balance, you must keep moving.”

He is insistent though, on how important this approach is, not just for himself, but for everyone. “Do somaething,” he says. “We all can make excuses. If people want to do something, there is something they can do. One step at a time. It doesn’t have to be a race… But you must keep moving to create a balance.”