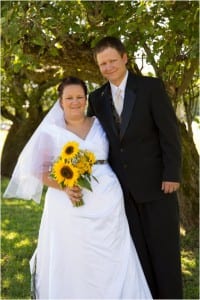 The hunt is over!

Corey Day and Tara Thygesen were married August 24, 2013. The wedding took place under a birch tree arbor in a field at Cyr’s Barn in Washington. The justice of the peace was Scott Blanchard. The photographer was Jay Kennedy of Catamount Photography.

The bride is a daughter of Mr. and Mrs. Thomas Thygesen of Washington. The groom is the son of Mr. and Mrs. Charles Day. The maid of honor was Brittney Metivier. The bridesmaids included Hallie Rubalcaba, Charlotte Martino, Brianna Poulin and Madison Moran. The junior bridesmaids were Heidi Breault and Jammi Roberts. The wedding attire colors included green, yellow and mossy oak camouflage. The best man was Tyler Thygesen and groomsmen were Kyle Day, Geoffrey Breault and Ryan Roberts. The little groomsmen, Trevor William Day, was carried in by his dad. The ringbearers were Hunter Day and Blake Martino.

The couple plans to take their honeymoon next year when their son is older.