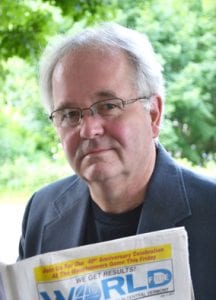 My family and I live in a big old, (emphasis on old) Dutch Cape house. When we bought it, it was not supposed to be a ‘fixer-upper’. Regardless of that, I feel like I have been ‘fixing-er-up’ since the day we moved in, thirty-three wonderful years ago.

The house is a sturdy old place, with its thick hardwood woodwork, hand carved stair railing, high ceilings, and higher heating costs. It really was a great place to raise our kids. The rooms are big, and the price when we bought it was not. The kids loved playing in the huge attic, which was a good thing, as we live in Barre City and have almost no lawn around the house. What lawn we do have is very steep, as this is Vermont, which I think is French for the word vertical, and a hundred years ago people used to build big houses like this one practically dangling off from cliffs, like this one does.

Yes, you heard me right, or read me right, to be more precise. Our house is more than a hundred years old; it’s a hundred and twelve, to be exact. Built in 1905, it is even older than me, or even my mother. I, myself, was not built until 1954. (Mom is 93, and is doing very well, thank you. She lives on her own in Florida, still drives her TWO cars, and just yesterday flew to Maine to visit her kids, grandkids, great grandkids, and great GREAT grandkids. She does almost everything better than I do, while having more aches and pains that I do, and complaining much less than I do about them.

For the past six months or so we, (meaning I, mostly,) have been working on the house a bit, painting some rooms, re-doing the bathrooms, etcetera. We’re also getting some new carpeting done and fi-nally buying some long-needed new furniture. (I can just about make out the outline of my body in my old recliner, and it’s not a pretty picture, and a little scary, believe me.) We’re doing these things just in case we end up staying here for another thirty-three wonderful years. Many more years than that would be a real strain on the human genome, I’m afraid.

As I’ve been working on the house, I have been noticing something strange about it. Truthfully, (maybe), I’m beginning to think that this old place has a personality, and it’s the personality of a 112-year-old house, which, I guess, makes sense. I now think that as a house gets older it begins to not accept change very well, sort of like some older people. I know for sure that it didn’t used to be so diffi-cult as it is now to paint a room or install a toilet in this place.Ę

When we moved here in 1983, (Yikes, that’s a long time ago.) I could do these things easily, without even breaking a sweat. Now this stubborn old house doesn’t want me to change anything, and every-thing I do in here seems to take TWICE as long as it used to. Breaking a sweat is the very first thing I do, and that’s just while I’m writing the list of things I will need to get for the project. I’m very certain that when the house was younger these things were easier for me to do.

This all can also be said for the exterior of our little piece of heaven, here in Barre. We did have the house sided and a new roof put on at one point, so, thankfully, I don’t have to do much to the outside of the building. I do still have to care for the lawn. As I said, our lawn is small, so I really shouldn’t complain, but lately, my mower is acting old too, which it really is. I once mentioned to my wife that I didn’t use to have to fill the mower with gas half way through mowing the lawn, but that I do now, so there must be something wrong with it. She replied that it also takes me twice as long to mow the lawn as it used to. I don’t know why she mentioned that. If she’s right, and she usually is, I will be forced to believe that even the grass is getting stubborn on me.

Honestly, I am thankful for this old house. Many years ago, when we were trying to buy it, I used to pray that God would let us have it. Now I pray that He will let me survive it. (Kidding, sort of.) In the words of the poet Edgar Albert Guest: “It takes a heap o’ livin’ in a house t’ make it home”. Well, the Shuman family has done a “heap o’ livin’” here, that’s for sure, and it is definitely home.

I really am comfortable in our old home, even if it’s getting stubborn, resists change, and is beginning to show its age. I’m just glad those things aren’t happening to me.