Each year, Steve Parren, wildlife biologist with the Vermont Fish and Wildlife Department, gets contacted about pet turtles people no longer want. Some turtles grow too large. Others require more complicated care than owners realize–turtles 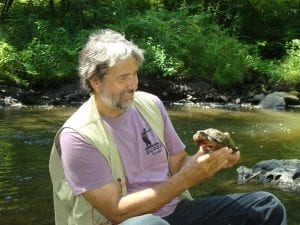 kept indoors require full-spectrum lighting for healthy shell development. And with lives that can last 50 years or longer, turtles often outstay their welcome. Not only is it illegal to keep native turtles as pets in Vermont, releasing captive native turtles into the wild could introduce diseases to, or mix up the genetics of, local turtle populations. Often, releasing a pet turtle is not a safe option, so a facility must be found to take in the turtle.

“In the past, I or someone from the Department, have tried to find appropriate homes for unwanted turtles,” says Parren, who heads up the wildlife diversity program and has worked with turtles for 35 years. “If the turtle is legal in the pet trade some pet stores or individuals will take them, but not all. A reptile welfare facility in New Hampshire that could legally re-home native species no longer takes some species and they aren’t alone.”

Parren notes many facilities have too many of some species and aren’t accepting common ones anymore. This could result in unwanted pet turtles being put down. While a drastic option, it’s better than risking a disease outbreak that could affect many wild animals.

Taking less-common species home is an even worse idea.

“Removing even a few adults each year can send a local turtle population into decline,” says Parren. “So please, enjoy Vermont’s native turtles in the wild. Help move one off the road safely in the direction it’s traveling. Take a photo with a phone.”

Make a report to the Vermont Reptile and Amphibian Atlas https://www.vtherpatlas.org/

But don’t take a turtle home.