The Next Generation Concert at Chandler

The Next Generation Concert at Chandler 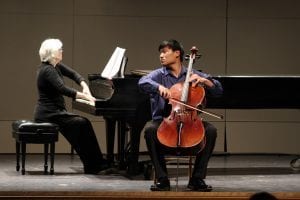 On Friday evening, May 17, fourteen young classical musicians from high schools in nine towns in Vermont and the Upper Valley will showcase their performing artistry, several making their debut in Chandler’s now eleventh annual The Next Generation concert. Four youngsters from elementary schools in the Hanover area will appear as guest artists in this all-teenager event.  The performance begins at 7:30 p.m. at Chandler Music Hall in Randolph.  There will be a reception to greet the artists following the performance.

In 2007, to kick off Chandler’s centennial celebration, pianist Christopher O’Riley brought his acclaimed NPR Boston “From the Top” program to the Chandler stage to much audience enthusiasm. Among the eight performing teenagers, only two were from our area.  The others hailed from Chicago, Pittsburgh, and New York. However, the whole format was so appealing that since that year, Chandler decided to go it alone and for the past ten years has enjoyed this engaging look-alike program with young musicians just from our own area.

For this concert, the area’s top music teachers recommend students whose accomplishments deserve special recognition, and this performance will feature those students who were selected after a competitive audition. Several of this season’s youth have performed in past The Next Generation performances.

On the program will be works for solo violin, solo flute, solo cello, and works for solo piano and piano four hands, as well as two piano trios, two violin/piano duos, and a concerto for four violins.  The composers represent a range from the mid-1700’s to the present, and include Telemann, Bach, Beethoven, Chopin, Brahms, Clara Schumann, Sarasate, Ravel, Rachmaninoff , and French composer Eugène Bozza..

The performing artists will be pianists Stephen Wang, Joseph Goff, Sophie Usherwood, and sisters Amica and Liana Lansigan, each of Hanover NH; Colin McQuillin, Northfield.  Sophie Usherwood appears on the stage again with a work for flute, as does Amica Lansigan on violin.  Other solo instrumentalists include cellists Zani Lewis, Burlington and Justin Zhou, Hanover; and violinist Katja Mueller of White River Junction. The ensemble members include violinists Stella Pinto, Aislinn McDougall, Nacio Levey and Miriam Viazmenski, and pianist Alice Garner, all of Hanover.

Unusual and a treat for this year will be works by three local composers, including works by two of the performers and a work from a local teacher.  Stephen Wang has composed a work for piano trio, which he will perform with our guest elementary school musicians,violinists Andy and Maggie Feng and cellists Ian and Kevin Sun, Lyme NH.  Katharina Mueller will perform her own work for solo violin, and Liana Lansigan will perform a piano piece by Upper Valley Music Center educator, Elizabeth Borowsky.

For tickets and more information about this performance, call the Box office at 728-6464, stop by the office Tuesdays through Fridays 12 – 4, or visit the Chandler website at www.chandler-arts.org.  Chandler Music Hall is handicap accessible and equipped for the hearing impaired.

This performance is presented by Chandler Center for the Arts, and is sponsored by Stave Puzzles, the Max Y. Seaton Memorial Trust, and Northeast Delta Dental.

Green Up Day Turns Out Vermonters to Make a Difference