The new year welcomes a new generation of inspiration

The new year welcomes a new generation of inspiration 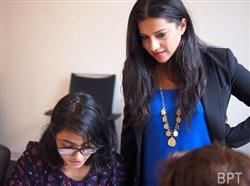 In 2012, the world watched as women made historic gains in everything from Congress, with an all-time high of 20 women in the U.S. Senate – to the field, where they’ve won 100 total gold medals at the Olympics.

In 2013, MAKERS.com moves us to reflect on the important advances made by women in years past to inspire the path forward. Presented by Simple facial skincare and created in partnership with AOL and PBS, MAKERS is a multi-platform video experience that celebrates trailblazing women by sharing their compelling stories. These stories, featured on MAKERS.com, showcase a unique variety of women – from high profile game-changers like Diane Von Furstenberg, Hillary Clinton and Condoleezza Rice – to six local heroes from across the country who have been recognized as Next MAKERS for their inspiring work across technology, education, mental health and more.

The Next MAKERS, including Reshma Saujani (New York), Emily May (New York), Anna Rodriguez (Tampa Bay, Fla.), Col. Jill Chambers (Washington, D.C.), Olivia Joy Stinson (Charlotte, N.C.) and Lydia Cincore-Templeton (Los Angeles), were selected from more than 1,200 nominations sent in during a six-week nationwide search for extraordinary women making an impact. Their stories are now featured on MAKERS.com alongside Supreme Court Justices, Secretaries of State, CEOs, athletes, activists and entertainers. In addition to sharing their stories, the women each received a $ 10,000 grant from Simple facial skincare to further expand the important work they are doing in their communities.

“It was a huge, huge honor to be recognized as a Next MAKER, and in many ways, I accepted on behalf of all the girls in my program,” says Reshma Saujani of New York, who is the founder of Girls Who Code, an organization working to educate, inspire and equip 13- to 17-year-old girls with the skills and resources to pursue opportunities in technology and engineering. “There are incredible women doing incredible work in this country and changing the lives of women; it’s an honor to be a part of that group – and it is now my challenge to pay it forward.”

And pay it forward she will. Saujani plans to use the grant from Simple to increase the number of girls who know how to computer program and close the gender gap in technology, with a goal of teaching 1 million girls how to code by 2020.

Similarly, fellow Next MAKER Emily May of New York is using her grant money to expand her organization, Hollaback!, where she serves as the co-founder and executive director. Founded in 2005, Hollaback! is an organization that empowers women and the LGBTQ community with a response to street harassment, utilizing a network of local activists around the world to expose incidents and leverage online conversation. May wants to see the organization expand to an additional 25 sites over the next few months.

Next MAKERS is just one piece of the evolving collection of women’s stories on MAKERS.com, which currently features more than 160 groundbreaking women. The initiative will continue to grow, adding new stories to the site on a weekly basis, and many of the women’s stories, including those of Ellen DeGeneres, Barbara Walters and Hillary Clinton, will appear in a new three-hour documentary, “MAKERS: the Women Who Make America,” premiering Feb. 26 on PBS.

“It is phenomenal how far women have advanced in America over just 50 years. We realized there was a need to recognize the dramatic progress women have made in all fields and in all aspects of life and document the inspiring stories in a living library format – something that hasn’t been done before,” says Dyllan McGee, founder and executive producer of MAKERS. “Our goal is to present inspiring stories online and on air in the hopes that they ignite dialogue and inspire continued change for women.”

“From my experience, women – no matter how courageous or “together” they may seem – all have moments of weakness,” says Anna Rodriguez, founder and director of the Florida Coalition Against Human Trafficking, an organization that has been helping victims of human trafficking, and will head to the professional football championship in New Orleans this year to educate the public on the issue. “It’s important to find sources of inspiration and empowerment, like MAKERS. I’m humbled to be a part of the group because truthfully, if I rescue one person, I’m happy.”