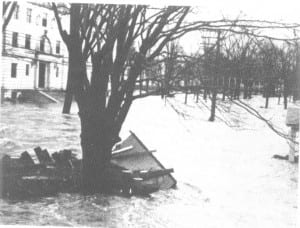 It was the flood of 1927, and not the Depression, that first led Vermont through a period of great change. The flood caused massive damage around the state, wiping out highways and railroads and sweeping buildings off their foundations. Hoover, then Secretary of Commerce, came to the state to view the damage, remarking he had seen “Vermont at her worst, but Vermonters at their best.” Much of Vermont was inaccessible except for air travel. Barnstorming pilots whose aid delivered medical supplies to remote parts of Vermont were the real heroes of the flood.

Before the flood, individual towns were largely responsible for the repair of bridges and roads, but the flood damage was so massive that they alone could not finance all the repairs. At a special session in November 1927, the General Assembly voted an $8.5 million bond issue. The state assumed further responsibility for highway maintenance, and it was symptomatic of the need to shift power from the local to the state level. The repair program also brought Vermont into the automobile age. Some damaged railroads were never restored, and most of the public funds went to new highways. Cars and trucks increasingly replaced trains and horses.

The flood also caused changes in the state’s dependence on the federal government. Contrary to popular belief, Vermont did accept federal money to help it rebuild after the flood. Vermont’s congressional delegation asked for and received more than $2.5 million to repair highways and bridges within Vermont.

The flood played a role in breaking the “single-term” tradition. In 1928, Governor John E. Weeks won re-election and became the first governor to serve two terms since the Vermont Constitution was amended in 1870 to provide for a two-year term. Weeks stressed that re-election was necessary to have continuity in the flood recovery program.

State government grew to meet the new demands placed upon it by the disaster, and it needed more money. In 1931 the Legislature passed the state’s first income tax and established a system of state highways.

The state realized a need for a flood control program. As a result, Vermont accepted federal dollars to build dams at East Barre, Middlesex, and Waterbury. The dams were built by the Civilian Conservation Corps and Army Corps of Engineers.

Studies by scholars such as Professor Frank Bryan of the University of Vermont have shown that Vermont is one of the most centralized of all the states. The reason for this is that counties play a relatively insignificant role compared to that in other states. Some argue that centralization took place years before the flood.

During the post-Civil War period, the smaller agricultural towns looked for greater state services. In 1869 the Vermont Dairymen’s Association fought for a greater participation in the fluid milk market. Transporting milk requires open roads and Vermont became one of the first states to establish state aide to highway programs. In addition, National Highway legislation required state supervision over federal grants. Promotion of the dairy industry had implications for a greater state interest in health and education.

Centralization was supported by both conservatives who were concerned about mounting governmental costs and by progressives who thought that centralization meant greater efficiency. In 1917 administrative supervision was tightened under a Board of Control. In the same year, the General Assembly consolidated a myriad of conservation and agricultural activities under a new Commissioner of Agriculture. Activities relating to workmen’s compensation and arbitration were placed under a Commissioner of Industries.