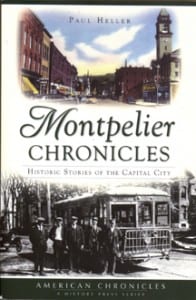 By Aaron Retherford
Local author Paul Heller doesn’t think of himself as a historian, but rather as somebody who enjoys old stories about places he grew up.

Heller is sharing some of those stories in his new book, Montpelier Chronicles: Historic Stories of the Capital City, released Monday through Arcadia Publishing. It’s available at Bear Pond Books in Montpelier, Next Chapter Books in Barre, the Vermont Historical Society’s bookstore, at www.arcadiapublishing.com or by calling (888) 313-2665.

Heller moved to Montpelier as a child and graduated from Montpelier High School in 1966. Fittingly, the opening story he tells in the book is about Colonel Jacob Davis, who was the first to settle land in what would become Montpelier. Davis named the settlement Montpelier in honor of France for supporting the Americans during the Revolutionary War.

Barre is known for its granite industry and had an extraordinary past involving anarchists, socialists, and the labor movement.

“Growing up in Montpelier, all you think about is state government and our great insurance company,” Heller said. “Years ago, there were these amazing industries. I find the stories of the Lane Shops fascinating.”

Heller finds the history of Montpelier “infinitely interesting.” In his latest book, he also tells the stories of Sam Upham, a counterfeiter during the Civil War; Daniel Pierce Thompson, Montpelier’s first historian; and Joel Foster, the man who brought water to the city from Berlin Pond.

Each of the 16 essays included in the book are quick reads and can be enjoyed individually or as part of the larger story. Illustrations and photographs are sprinkled throughout the text to fully immerse the reader into Montpelier’s history.

Heller said his fascination with history came late in life. He’s been a member of the Vermont Historical Society for about 10 years. However, he was a librarian for 25 years, providing the skills he needed in researching for his books.

Heller, retired, joked that he can’t seem to stop writing these historical books. After turning in his manuscript for the Montpelier Chronicles, he continued writing about the time Buffalo Bill’s Wild West Show visited Montpelier in the late 19th century.

“For me, I think it’s a testament of my feelings for my hometown and how much I loved growing up in Montpelier,” Heller said.