Jamie Heath, of Barre, sits in an armchair in her living room. Her posture, which is casual yet engaged, and her eye contact, which is direct, make her seem more mature than her seventeen years. Beside her, fanned 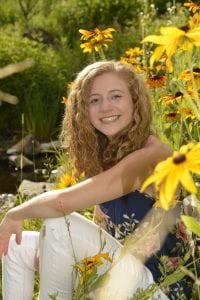 open on a small side table, stands her book, “Wishes Are Medicine, How Make-A-Wish Gave Me Hope & Helped Me Heal.”

Heath’s book starts out: “I wasn’t feeling well.” The illustration of Heath, done by Leonard Wells Kenyon, of Arlington, VT, shows her sitting with a thermometer in her mouth, her face scrunched in discomfort, a cup of tea and a bowl of soup in front of her.

“There are all kinds of hidden messages in the book,” Heath explains, leaning in to look over the page. “Linda is the first Wish mom,” she says as she points to the soup can beside the bowl of soup that looks familiar with its red and white labeling. Look closer, and you’ll see that it says Linda’s Chicken Soup. “And there’s Bob, Bob is on every page.” Sure enough, Bob, Heath’s pet turtle, is there as well, in the corner, with a tear in his eye.

Heath flips the page and continues to point to details. She places her finger on a card with a heart on it beside a hospital bed: “That heart is for my friend Abbey, who has passed away.” She then points to a star outside the hospital window, “There’s the Make-A-Wish star.”

All these little messages point to a larger message: that Make-A-Wish is a big part of a child’s healing processes and that, according to Heath, it is not just for terminally ill kids; it’s also for kids who, like Heath, have life-threatening illnesses.

“Make-A-Wish is a big part of the healing process, whether its healing literally, or figuratively. It really helped me heal.”

Five years ago, when Jamie Heath was twelve-years-old, she had her second stroke, and unlike the first one, from which she was able to fully recover, this one left lasting brain damage. She had to relearn a lot of what many take for granted, such as walking, and reading. “I was reduced to a 4th grade reading level and I was originally a 10th grade reading level, just because my comprehension was so bad.”

Yet, here she is, about to start a book tour.

Her process getting here was not easy. As her book explains, it was frustrating and slow-going. She describes an instance when, during an OT appointment, she found it difficult to simply put a block on top of a cup. For three years, she struggled with the weight of depression. There were times when she could barely get out of bed. “It was very long process. But Make-A-Wish helped me get out of that slump.”

When the wish granters from Make-A-Wish came to Heath’s home, she initially did not know what to wish for. “I wanted to include my whole family,” she says, laughing. “My mom said, ‘Jamie, you don’t need to do that, it’s your wish.’ But I wished for them to be there too! It makes the wish even better.”

And then it hit her: what about swimming with sea turtles in Hawaii? 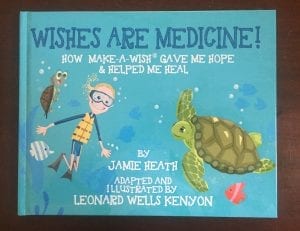 Heath has always loved turtles. When she was in preschool, she envied that her friend always found turtles during playtime. “I could never find turtles,” she explains. But then, one day, at a soccer game in Williamstown, when she was around ten, she found a turtle on the field. It was so small, she was afraid that it would get trampled. To keep it safe, she put it in her mouth guard. She then brought him home and named him Bob Larry Turtle, or BLT for short.

Thanks to Make-A-Wish, Heath, at the age of fourteen, Heath and her family traveled to Hawaii to see the sea turtles. This got her out of her depression. Not only had it given her something to look forward to, but it served as a sort of analogy. “I’m just like one of those baby turtles fighting its way to the ocean to live,” she writes in her book. “And I’m going to be one that makes it!”

After Heath returned home, everything changed. She played sports again and she began to swim. “I’m a dedicated swimmer. I swim about six months in the winter and about a month in the summer. I ski when I’m able to. I’m pretty busy,” she laughs. She’ll continue to be busy. On top of going into her senior year at Spaulding, Heath will also be taking college level classes at Vermont Technical College, and, for the month of August, she and her book will be touring the state, making appearances and giving readings.

Her advice to others? “If it’s a life-threatening issue, definitely talk to Make-A-Wish. I know that my mom said she was scared to sign me up because she didn’t want me think she was giving up on me. It’s not that at all. It’s a way for your kid to take the extra step and walk into the healing pool.”

Vote for Scott on August 14th