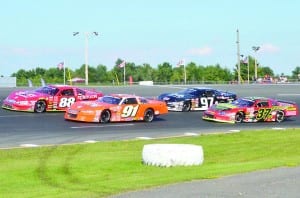 The starting field for the 6th annual Bond Auto ACT Invitational at the New Hampshire Motor Speedway on Saturday, September 20 has been established. A field of 43 teams will compete in the 50-mile event that pays a minimum of $7,500 to win and $1,000 for 43rd. Teams have been chosen from throughout the Northeastern United States and the Province of Quebec, Canada to take part in one of the American Canadian Tour’s (ACT) most anticipated events of each year.

Previous Bond Auto ACT Invitationals have been won by some of the most notable names throughout the short tracks of the Northeast. Eddie MacDonald from Rowley, Mass. has three Invitational wins; Joey Polewarczyk, Jr. (Pole) from Hudson, N.H., and Ray Parent from Tiverton, R.I. have each won an Invitational. Using the unique ACT handicap system, every Invitational winner has come from a starting position no better than 19th-28th to take the wins.

Past Champions of ACT who have yet to win an Invitational at the New Hampshire Motor Speedway will join the previous winners on Saturday, September 20. Nick Sweet from Barre, Vt. is a two-time Thunder Road “King of the Road” Champion. Sweet won the Vermont State Late Model championship in 2013. He is likely to win a second title this season. He finished second in the Invitational in 2009 and 2011 to three-time winner Eddie MacDonald.

“The first time it was just very cool to be top three in the inaugural race and sit at the press conference at New Hampshire Motor Speedway after the race. The second time Eddie kind of took me to school on that final turn coming out of four, I hope to show him how well I learned my lesson that day,” said an excited Sweet about returning to this year’s event.

Patrick Laperle, Ste Denis, Quebec won $25,000 and the hearts of all the Quebec fans at the ACT International held at the Airborne Speedway in Plattsburgh, N.Y. this past July. The #91QC team has also won about all there is to win in ACT racing. Winner of the American Canadian Tour—US in 2008, the ACT Quebec Série- three times, three Milk Bowls, and countless other major events, the pride of Quebec racing had a runner-up finish in the 2012 Invitational at New Hampshire. Laperle, with a win at the 2014 Bond Auto ACT Invitational, would have a victory lane celebration with what would arguably be the most enthusiastic fan base, made up of primarily hockey-crazed Quebecers.

Eight-time ACT Champion Brian Hoar, of Williston, Vt., started his love affair with the New Hampshire Motor Speedway with what has now become the NASCAR K&N Series. He has won just about every title and event available in ACT racing, including the ACT All Star race on Indy weekend at NHMS in 2011. However, team #37VT has not won the Invitational after five tries.

“Rick Paya (owner of the Goss Dodge ACT team) and I have had an incredible number of years together. I have always loved racing at NHMS, but with all the other success we have had, we both would really like to pull off a win at my favorite track. It seems like Eddie (MacDonald) and Joey (Pole) have things going pretty good there, but I am hoping this year we can hook up with three or four teams that we can trust going into the last 10 or 15 laps. That could make this year the most exciting of all the times we have been to the ‘Magic Mile.’ I know if it plays out that way, we can make it worth the price of admission,” said Hoar, the driver with the most wins in ACT history (40).

The 2014 Bond Auto ACT Invitational is part of a spectacular triple header program on Saturday, September 20, 2014 at the New Hampshire Motor Speedway during the NASCAR Cup weekend. The NASCAR Camping World Truck Series will post at 1:00 p.m., followed by the NASCAR’S Whelen Modified Tour. The Bond Auto Invitational will be introduced at approximately 5:00 p.m.

For information on ticketing, camping and scheduling, visit www.nhms.com.