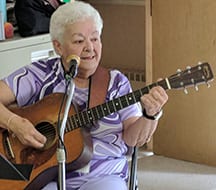 OK, she still has a few weeks before officially turning 89, but when you see Lee Jollata singing and playing her Martin Guitar for residents at Genesis Healthcare/Berlin Health & Rehabilitation Center (BHRC) you really would think she was 20 years younger.

Twice a week (10am and 2pm) she performs two shows at the BHRC for anyone who wants to listen and you can be sure she draws a crowd each time playing older favorites and some not so older songs.  Three to four years ago, Joe Carrol of WCAX featured Lee on his popular “Super Senior” TV program and many viewers learned that Lee came from Maine to Vermont via a touring bluegrass band, Duke and the Swinging Billies, and by our good fortune met the love of her life, state policeman Jim Jollata, and stayed here when the band returned to Channel 8 in Maine.

Lee and Jim adopted two “wonderful” children who have produced, to date, two “even more wonderful grandchildren.”  Jim died in 1997 so Lee spends as much time with her family and “adopted family” at BHRC.

“I love it here.  The people are just wonderful,” notes Lee, who gives back as much as she gets from her volunteering.

The staff at BHRC will relate just how generous she has been to them with her time, purchasing items for the home and even throwing a big “cook-in” party this week at BHRC with a special three-piece band.

“Volunteering has always been a big deal to me,” admits Jollata.  Originally, when Lee retired from her work as an agency representative at National Life in 1995, she was asked (by Sandy Deforge) to sing once a month at BHRC. Then as her popularity with residents became more apparent, she was asked to sing once a week and now being in such high demand, it’s twice a week, two times  each Wednesday and Friday.

Many people will also remember Lee as a volunteer score keeper for the girls basketball program at Twinfield.

Longevity seems to be in Lee Jollata’s veins as both her parents lived to be 87.  “I eat anything that I want to in moderation, but don’t drink or smoke.  “Oh yes” she jokes, I’m a die-hard Red Sox fan and that keeps me going too! -GH