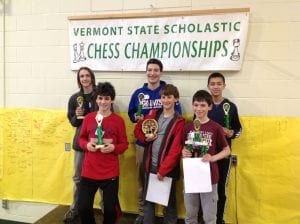 Stowe students came out on top at the John Balch Memorial State Chess Championship on April 6. Other schools and age groups from across the state competed Saturday at Berlin Elementary. It was quite a run for the kids, who didn’t compete in the 2018 team event, won by Albert D. Lawton Intermediate School. The annual tournament runs individual and team competitions, and individual winners will move on to national events. Sasha Kagle of Jericho, the state’s top high school player, booked himself a ticket to Orlando, FL to compete against every other state champ in August. Elizabeth Tupaj of Essex Junction had the top score among girls from across Vermont, so she won an invitation to represent the state in the National Girls Tournament of Champions in Orlando in August.

130 students from across the state competed for grade level championships in Kindergarten through grade 6, and middle school and high school championships. Sasha Kagle of Jericho awas crowned champion of the high school section. Jacob Graham of Bristol was the victor in the middle school division, and won the right to represent Vermont in the Barber K-8 Nationals, held concurrently in Orlando.  Elizabeth Tupaj of Essex Junction earned the nomination to represent Vermont in the National Girls Tournament of Champions.  In the High School Team Competition, St. Johnsbury High Academy posted the win, with Rutland High School in second place.  The Middle School Team Competition was won by Stowe Middle School.

Congratulations to all who participated from The WORLD.