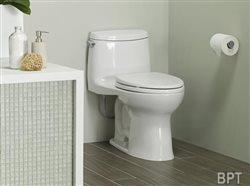 Four hundred gallons – that’s how much water the average American home uses in a day, according to the Environmental Protection Agency. Is it any wonder? You turn on the tap to get a drink and run the water until it feels cool, or let the shower pour until the water is hot enough. The toilet or irrigation system runs a bit too long, and your dishwasher dates to the Clinton administration.

The good news is that Americans are becoming increasingly aware of the need to conserve water, both for the good of the environment and to save money. Many are finding a solution in technology that contributes to conservation through innovation. From shower heads that employ air pressure to deliver a satisfying shower using less water, to high-efficiency dishwashers and water-sipping lawn irrigation systems, conservation technology has found a place everywhere in the home where water is used.

Nearly 17 percent of total household water use is consumed in the shower, according to the EPA. In addition to awareness of conservation tactics – such as taking shorter, cooler showers – consumers are also turning to high-efficiency shower heads to save water and still enjoy the refreshing experience of a good shower.

Products like TOTO’s Aero Shower System deliver a pleasurable shower experience while using a fraction of the water consumed by traditional showerheads. Patented air-injection technology increases the volume of water in each droplet by infusing air into each drop. The technology generates a balanced spray that leaves bathers feeling as if they’re enveloped in far more warm water than is actually being used. Three innovative spray patterns – AeroJet+ (air injection), Cascade (a broad warming stream) and Gyrostream (massaging) – are available at the simple click of a button on the multi-spray handshower.

Accounting for nearly 27 percent of household water use, toilets are also becoming more water efficient; some clear the bowl completely using a mere 1 gallon of water per flush. TOTO’s UltraMax II 1G toilet does its job using gravity, two innovative jets in the bowl and just a single gallon of water. The position of the two water jets on each side of the bowl’s interior deliver powerful swirls of water to accomplish flushing tasks effectively as they cleanse the bowl and rim. Owners will need fewer harsh detergents, which are expensive and harmful to the environment.

Dishwashers that predate 1994 cost homeowners an extra $ 40 in annual utility bills and waste more than 10 gallons of water per cycle, according to EnergyStar.gov. By contrast, newer, technology-driven washers that have earned the Energy Star rating save an average of 1,300 gallons of water over their lifetime.

Modern dishwashers have a range of features designed to conserve both water and energy. Some use specially designed jets that spray dishes with detergent or water during the cleaning cycle to maximize efficacy. Others feature soil sensors that automatically adjust the wash cycle to best handle the level of grime on dishes. Temperature adjustments allow users to choose high-temperature water when needed and a lower water temperature for lighter loads.

Overall improvements in dishwasher technology have also virtually eliminated the need to pre-rinse dishes – a dated practice that once wasted hundreds of gallons of water every year in the average household.

Refrigerators have also gone eco-friendly. With improved temperature controls, super-efficient compressors, thicker insulation and high-performance coils, modern refrigerators demand far less electricity than older models. Many incorporate innovative energy-conservation features along with user-friendly amenities like touch-screen controls. Still, some manufacturers are taking the conservation message to heart and offering attractive, well-designed options that do not include in-door water dispensers, which can consume both water and energy.

In the laundry room

With nearly 22 percent of a home’s water use attributed to clothes washing, demand is high for washing machines that are both water and energy efficient. Americans wash about 300 loads of laundry per year, Energy Star says, and Energy Star-rated appliances use 35 percent less water and 20 percent less energy than older models.

From simple timers that allow you to automatically start the machine when water and power demands are lowest (typically at night), to machines that make use of tumblers rather than agitators, a range of features can help homeowners use less water and energy – and reduce utility bills. Replacing agitators with tumbler action has allowed manufacturers to offer machines – both top-load and front-load – that need significantly less water to clean the same amount of clothes.

Caring for spring and summer skin

Caring for spring and summer skin