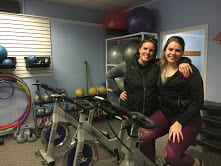 Marcy Rochford, the owner of the Gym For Women in Barre City, and her daughter, Sami Rochford, are preparing for change. Decked out in athletic attire, both ladies sit side by side on workout equipment.  Sami, who is twenty-three, will be taking over her mother’s fifteen-year business. The excitement from both women is palpable.

“This is a wonderful business to be in,” Marcy explains as she sits back in the seat of the resistant weight machine and stares off for a moment. “It’s so rewarding. You get to be a part of people’s health. You see them reaching their goals. It’s a rewarding job.”

She looks over at her daughter and smiles. “This is a great opportunity for her.”

The Gym For Women, originally a Ladies Workout Express, opened in 2002 and remained as such for ten years.When Marcy first started, the main floor, which was all they had in terms of space, was a circuit. Two years later, they expanded, taking over downstairs. They installed more equipment, cardio machine, as well as tanning beds and a sauna. Over time, the Gym For Women continued to expand, adding classes, trainers, free-weights, and resistant bands.

And in 2012, Marcy decided not to renew the franchise agreement and go independent. She changed the name and the look and bought all new gym equipment. She also decided to keep it a ladies-only gym.

There are not a lot of gyms in the area. Aside from Gym for Women, Granite City Fitness, which is all classes, and Jazzercise have been around for a while.
Marcy nods as she explains, “we all support each other.”

Until Planet Fitness opened in the Berlin Mall, the Gym for Women had the lowest rates around for a full-service gym.

Marcy and  Sami seem undeterred as they lean forward and enthusiastically. Marcy: “We are small, which is not a bad thing. We’re there. We see you and we interact with you and we know your name. We become like,” She pauses for a moment and looks over at her daughter and both complete the sentence at the same time, laughing:
“Family.”

Marcy continues: “The nice thing about this community is that there are a lot of small locally owned business. And it’s really important now, more than ever, as big box stores come into town, that people continue to support the local business downtown and in surrounding areas.”
She talks fast and her passion is obvious; there is a glisten in her eyes. She pauses for a moment.

“We can’t stay in business unless the community helps us.”

Both Marcy and  Sami are confident that they will gain new members and that their previous members will return from Planet Fitness for several reasons. Aside from being a small family-run business, it remains a women-only gym.

Marcy laughs as she explains, “We’re all in the same boat. We’ve all fought the battle of the bulge at some point.”
She speaks from personal experience. When she first opened her gym, she was heavier than she wanted to be. Not only has she lost that weight, but she has kept it off.

“This place has given me my health back.”

It’s given Marcy and her family more than that though. It allowed her to have control over her own life. “It’s been a lot of fun for me over the years. But I worked hard. And it gave me a lot of flexibility to go to my kids’ games or take them to doctor appointments.”

When Marcy first started out as a business owner, she had other gyms throughout Vermont. But Barre was her first and, over the years, the most successful despite the economic difficulties of the area. After going through a divorce with young children, she decided to downsize and focus solely on the gym in Barre and her family.
“It’s been the best thing I’ve ever done.”

But it is time for a change. And change, in this case, is good. Marcy moved to New Hampshire in November and in September she is getting married.
She is thrilled that the next generation of her family is taking over.

Her daughter Sam basically grew up in the gym since she was seven-years-old.  Sami, like her mother, wants to keep the same over-arching message: start a safe fitness routine young and do that in a place free of judgement. They encourage members to wear whatever they want, and remind them that they too have all been though challenges.

They are, as a women-only gym, there to support each other. Whether one is new to fitness, or a hoping to get back into it after many years,  Sami, as the new owner, will be there to ensure the environment is conducive to growth and encouragement.

Towards the end of the conversation, Marcy stops talking and a silence, except for the background pulsing of a peppy pop song, settles over the gym.  Sami whispers “she’s going to cry.”

“I just want to add,” Marcy starts, before her throat catches, “that this has been really, really good for me. Not many people can say they enjoy going to work. I mean, really enjoy it. And I have. As a mom, and as a business owner, I couldn’t be more happy and more proud that Sami is taking over.”
She looks over at her daughter, who, although smiling, is also wipes away tears.

“I’m excited for what she will bring to this community. Fifteen years is a long time. I also want to thank all our members for your constant support.  Without you, we wouldn’t be here.  I hope the community continues to support locally owned businesses. Lastly, I want to thank our wonderful team of women who work at The Gym, especially my long-time friend and co-hort, Carol LeClair. It wouldn’t have been nearly as much fun without you.

We’ve had our ups and downs, but we’ve always come back. And I think the gym is important for the women in this community.”

VOTE FOR VERMONT: Politics And Graveyards