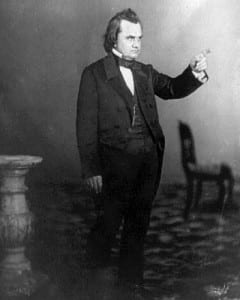 The Democratic party in Vermont lost any abolitionist support it still had in 1854, when Illinois Senator Stephen Douglas (a native of Brandon) proposed the Nebraska Act, which allowed new states in the Nebraska territory to decide for themselves whether they wanted to allow slavery. Douglas was described as a “steam engine in breeches” and a “fountain of tobacco juice and spread-eagled oratory.” Economic expansion, thought Douglas, would help the nation forget the issue of slavery.

Douglas had not anticipated the vehemence of the opposition. He was assailed throughout the North by “Anti-Nebraska” groups, and Vermont was no exception. The Montpelier Watchman called his actions a

… The deed was fitly done in darkness – for it was an evil deed… Every vote in the affirmative we regard as a stain upon the personal integrity of the man who casts it. Let no such man be trusted.

At March town meetings the Nebraska Bill was condemned. Charlotte censured Douglas, the bill’s sponsor. The town of Springfield declared that “we will vote for such men, and such men only, as will use their vote and influence to protect this territory from the encroachments of slavery.” Mass meetings protesting the Kansas Nebraska Act were held in Rutland, Chittenden and Franklin counties.