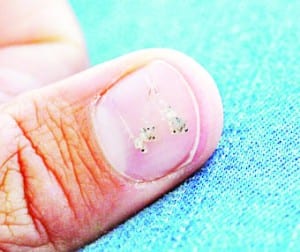 The spiny water flea is a tiny invasive crustacean that was recently found to have spread to Lake Champlain. Photo by Emily DeBolt.

A new aquatic invasive species, the spiny water flea, was recently identified in Lake Champlain, but biologists with the Vermont Fish & Wildlife Department do not believe the species will have a dramatic effect on fishing opportunities in the lake, or on most of the lake’s native plants and animals.

Spiny water fleas have been in the Great Lakes since the 1980s, giving researchers several decades to study what happens when this species arrives in a new water body.

According to Shawn Good, fisheries biologist and head of the department’s aquatic invasive species team, while spiny water flea has had some impact on the Great Lakes, it has not proven as negative to fish populations as was once anticipated.

“Great Lakes anglers have needed to make some adjustments to fishing techniques due to the spiny water flea, but mostly it has been a minor inconvenience,” said Good.

“Anglers who fish using downriggers have been the primary ones affected, but they’ve found ways to minimize the impacts by spooling their reels with heavier weight main line and attaching smaller diameter leaders,” said Good. “The heavier main lines tend to prevent the spiny water flea from snagging and globbing up the line, while the finer leader still allows lures to be fished effectively for line-shy species like trout and salmon.”

Good also points out that the spiny water flea has a confusing name. “This is not a flea – it is actually a crustacean,” said Good. “Although the spines can present a problem for fish attempting to eat them, they do not pose any risk to people swimming in the lake. They won’t cut your feet like zebra mussels.”

Spiny water flea can disrupt the food web by preying on native zooplankton species, which are a food source for many small fish. But while some fish species avoid consuming spiny water fleas because of their barbed tails, others like smelt, cisco and alewife can actually begin targeting them as a food source.

Good says that although they anticipate the effects of the spiny water flea to be modest in Lake Champlain, the effects could be more dramatic if they are moved to smaller, inland lakes. Therefore, boaters and anglers should remain vigilant for these aquatic hitchhikers and take every precaution to stop the spread of all invasive species.

“By our count this is the fiftieth aquatic invasive species to come to Lake Champlain,” said Good. “Even a minor addition to an ecosystem can significantly alter the balance among native species in ways that are often irreversible and the cumulative impact of these changes can be dramatic.”

“The best way to be sure of removing spiny water fleas or any other aquatic hitchhiker from your equipment is to dry it in the sun for five days before you move from Lake Champlain to another water body. You can also spray equipment with pressurized hot water to kill spiny water flea and their eggs,” said Good.