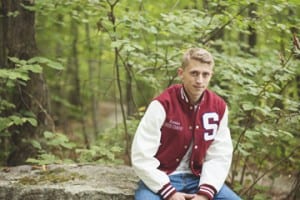 The United States Military Academy at West Point, established in 1802 by Thomas Jefferson, invited Reardon to join its 2016 Corps of Cadets.

“I’ve always thought of the United States Military Academy as the best college in the nation,” Reardon said, “so to get the opportunity to be an officer, along with the unparalleled training and education that West Point offers, should prove to be an outstanding experience.”

An honors student and presently the highest ranking cadet in Spaulding’s JROTC program, Reardon also set the school’s cross country record this past fall with a 5K time of 17.2 minutes. Additionally, he is an active member of the Drama Club, among other school activities.

Reardon, who received the endorsement of Vermont’s Congressional Delegation as part of the West Point application process, is the son of public school teachers Mary and Michael Reardon of Washington, Vermont.

In addition to his parents, Reardon says two other people were equally excited when I got the news, his JROTC Army Instructors, Lieutenant Colonel Donald Singer and Chief Warrant Officer Shaun Driscoll.

“They have been instrumental in my success,” he said. “Since I joined JROTC in my sophomore year, they have been nothing but encouraging and helpful towards my path to become a part of the Army they retired from.”

Reardon, who plans to study languages and travel the world as an Army officer, begins his basic training in June. Upon graduation from West Point, Reardon will be commissioned a second lieutenant in the Army.