Mouse in the House 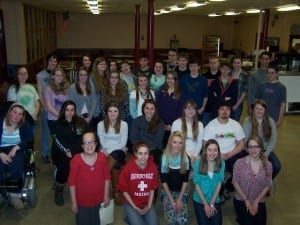 A Principal’s Breakfast was held on Thursday, March 20th at Spaulding High School to honor the recipients of the Robert M. Burdett Memorial Award.

This award was named after Robert M. Burdett, a former assistant principal and principal at Spaulding High School (1971-1979). It is presented to students who contribute to the positive atmosphere of the school based on their regular attendance, friendly demeanor, cooperative behavior, and earnest desire to do their best. Mr. Burdett was known to be a champion of the “unsung hero,” and this recognition continues to honor the good citizens of the student body. The award is based on nominations from teachers and staff at the school and is presented each quarter.

For the third quarter of this year, 42 students received this award. Principal Tom Sedore along with Jayne Parker, School Psychologist and Coordinator of the Burdett Awards, presented award certificates to the following students:

Build Up Your Immunity to Vaccine Myths

What Ails Vermont - Is There a Cure to the Drug Epidemic?

What Ails Vermont - Is There a Cure to the Drug Epidemic?