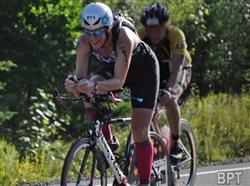 Paula Van Nostrand, a fit, health-conscious 34-year-old woman was training for her first triathlon when her life was placed on a trajectory no one saw coming. She began experiencing unexplainable symptoms but ultimately attributed them to her training.

It started with exhaustion and grew to include acne, joint pain, irregular menstrual cycles and, oddly enough, foot growth. Paula visited various specialists to see what was triggering these seemingly random issues, but no one was able to identify the cause and new symptoms continued to appear. Several years later, it all came to a head when Paula was struck by a sharp, shooting pain between her eyes – that’s when she sought urgent care. She was admitted to the hospital, and after much testing, learned that the pain was caused by a tumor pressing on nearby brain tissue and that she was living with a rare condition called acromegaly.

Affecting three to four people per million each year, acromegaly, is a serious and debilitating endocrine disorder. The condition is caused by a small, non-cancerous tumor on the pituitary gland in the brain that has a large effect on the body. In those living with acromegaly, high levels of growth hormone (GH) resulting from this tumor cause the liver to produce another hormone, called insulin-like growth factor (IGF-1), which is responsible for tissue growth in the body. When GH and/or IGF-1 levels are elevated, the physical and emotional effects can be serious and include heart disease, diabetes, depression and/or social anxiety, high blood pressure, arthritis, excessive sweating, and enlargement of the hands, feet and head. If left untreated, acromegaly is associated with a reduced quality of life and an increased risk of death.

As was the case for Paula, people with acromegaly often face a long road to diagnosis because the disease progresses slowly and individual symptoms are often attributed to other causes. From the time Paula first experienced symptoms, it took approximately six years filled with various doctor visits to receive an accurate diagnosis. Unfortunately, this delay is common among acromegaly patients, with diagnosis taking anywhere from four to 10 years on average.

“I went to so many different doctors, but each specialist focused on their practice area and missed my combined symptoms which would have indicated that I had acromegaly,” said Paula. “That’s why I make a point of telling everyone I can about my condition. You never know if they might know someone who is experiencing strange symptoms and unknowingly living with this rare disease.”

Paula has dedicated her life to sharing her story and uses her experience to motivate others in her work as an inspirational speaker. She also meets with other people who have been diagnosed with acromegaly and helps them to better understand what may be coming next in their own personal journeys. Paula understands firsthand that having a rare disease, like acromegaly, can not only cause physical symptoms but also deeper emotional challenges. By sharing her story she hopes to help others avoid some of the issues she faced.

“While living with acromegaly isn’t always rosy, I choose to focus on the positives,” Paula said. “I know there’s a possibility of relapse, but that’s just the way it is. I check my blood work regularly with my health care provider to ensure my hormone levels are where they should be and I encourage other patients do the same. I remind them that we are our own best advocates and we must never ignore our symptoms.”

In recognition of patients living with rare diseases, like acromegaly, people across the globe celebrate Rare Disease Day on February 28. Tell family and friends about Paula’s story and educate others about the signs and symptoms associated with acromegaly. By raising awareness, we can work together to help patients, like Paula, receive an accurate diagnosis sooner. For more information about acromegaly, please visit, www.AcromegalyInfo.com.

Parents: How to pick the right cost-effective technology device for your child's learning