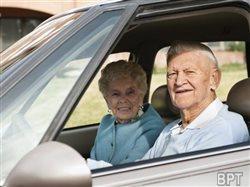 There are currently more than 23 million licensed drivers aged 70 and older, and with baby boomers beginning to reach 70 years of age, the number of seniors on the road will rise steadily over the next two decades.

A new survey released by Liberty Mutual Insurance finds that the majority of senior drivers are behind the wheel regularly, even with reported limited physical abilities. Though many seniors drive safely well into their later years, it’s likely that they will eventually have to face the difficult decision to stop driving. While the majority of senior drivers surveyed are open to conversations about limiting or stopping their driving, only 6 percent have spoken with someone about their driving abilities.

“These are difficult conversations but important to have early and often, because everyone ages differently,” says David Melton, driving safety expert with Liberty Mutual Insurance and managing director of global safety. “Too often, these discussions are avoided until warning signs appear or, worse, there is an accident. It’s a step we all need to take to ensure the safety of our loved ones and the community.”

The report reveals that despite declining physical abilities, many seniors still drive several times a week or even every day. In the past six months, the majority surveyed reported driving regularly despite slow reaction times, difficulty seeing or hearing, getting lost or feeling confused while driving.

While nearly all senior drivers would consider limiting or stopping their driving if presented with the right reason, most are hesitant about transitioning to the passenger seat. Top concerns among seniors about limiting or stopping driving include losing independence, becoming less active, difficulty finding alternative forms of transportation, and feeling isolated.

In 2013, Liberty Mutual Insurance conducted a survey of children of elderly drivers to determine if they were having conversations about driving with their aging parents, and if not, what was preventing them. The survey found that more than half of children with senior parents were concerned about their parents’ driving abilities and safety, yet nearly one-third avoided initiating the conversation. However, this new report reveals that people may be avoiding conversations with aging drivers more than self-reported, while more seniors are actually open to talking:

* Only 6 percent of senior drivers report having had a discussion about their driving abilities, despite 84 percent saying that they would be open to talking about the issue.

* The majority of seniors who have not yet had a conversation report they would feel most comfortable being approached by their children or doctor.

* Seniors cite a doctor’s recommendation and recognition of their own declining physical abilities as top reasons to limit or stop driving.

“We know from our surveys that seniors are more receptive to conversations about driving than their children assume, which often prevents conversations from happening,” says Melton. “In reality, seniors are usually so receptive to these conversations that many stop driving within six months of talking about it with their loved ones. These are tough conversations, but caregivers should take comfort knowing that these discussions are typically easier than expected and usually have positive outcomes.”

It’s more important than ever for children and loved ones of senior drivers to have conversations about driving early and often, before it’s time to stop. For additional tips on talking to loved ones about driving and resources for seniors when driving is no longer an option, visit www.LibertyMutual.com/seniordriving.

Addressing a new era in security: how to protect your business from the inside out

Addressing a new era in security: how to protect your business from the inside out