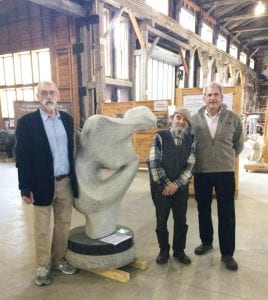 The Vermont Granite Museum announced a donation by Allan Schein and his Family of a granite statue sculpted by Giuliano Cecchinelli, at its annual opening event on May 18th. The Schein Families donation was made in honor of their mother, Ethel Kaplan Schein, who passed away 10 months after a devastating stroke in 2013. The sculpture “Repose,” designed by Cecchinelli in the 1960s and sculpted in 1983, was acquired by Allan Schein 30 years ago. It was purchased from the Barre Sculpture Studio a year after it was part of a formal exhibit of works by local granite artisans in 1989. For years, Schein displayed “Repose” at his home in Plainfield, Vermont and then had it moved to Salt Lake City when he relocated in 1996. Mr. Schein noted in a speech at the opening event that “Repose” was admired by his mother who was a lover of ballet and dance in general. The Schein family has donated the sculpture “In loving memory of  Ethel Kaplan Schein, 1925-2013” on behalf of her children Allan, Burt, and Laura. When installed, “Repose” will be placed along the museum’s ¾-mile multiuse path and be the first statue in its proposed sculpture park. Visitors can see “Repose” inside the Granite Museum, which is open Tuesday through Saturday, 10am to 4pm, until the end of October.