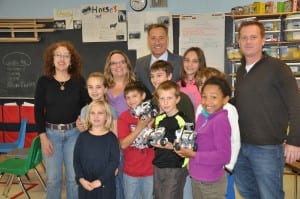 Gov. Shumlin met with the Berlin Elementary FLL team during a recent visit to the school for an educational conference.

Seventeen teams of up to 10 kids ages 9-14 will participate in the Nature’s Fury Challenge, a robotics competition conceived and designed to raise interest in science, technology, problem solving and teamwork.

FIRST (For Inspiration and Recognition of Science and Technology) is a not-for-profit Manchester, NH-based charity founded in 1989 that designs programs to pursue education and career opportunities in math, science, technology and engineering. The inaugural FIRST competition drew 28 teams into a New Hampshire High School gym. In 2012, after becoming a global event with over 250,000 participants, FIRST held a “World Festival” celebration in the Edward Jones Dome in St. Louis.

LEGO, the world’s second largest toy company, joined forces with FIRST in 1999. LEGO produced the original LEGO Mindstorms product – a programmable robotics kit. The key component, known as the “brick,” is a computer which receives input from multiple sensors and can control several motors. LEGO manufactures mission model sets with LEGO elements needed to build models that the robot will interact with on a time clock as well as a “field mat” playing surface.

Randy Brown, who teaches Advanced Placement Computer Science and Physics at U-32, is an enthusiastic FIRST LEGO League proponent. Brown is prepping three teams for the upcoming Norwich event – two from U-32 Middle School and one from Middlesex. Teams from East Montpelier and Berlin also plan to compete.

In preparation for the Norwich competition, various teams are making presentations and trial runs in the community. The Berlin Elementary School team, coached by Cindy Gauthier, demonstrated its work at the Berlin Fire Department. One of Randy Brown’s U-32 teams recently met with the Montpelier Public Works Department.

“I’ve coached teams that in the past have had to travel to New Hampshire to participate,” Brown said. “I welcome the fact that Vermont is hosting its own event. FIRST LEGO League focuses on problem solving and choosing the right approach. I really think we need a cultural shift when it comes to making students, especially girls, aware of computer science and to provide them an opportunity to see if it interests them. What commonly happens is that by the time a girl figures out she has an aptitude and an interest for it, she’s about to graduate.”

“It’s really a nice spectator event,” Brown noted. “There’s a lot of high energy. The robotics part is the hook, but the real value is the teamwork and the experience of making a presentation to adults.”

David Feinauer leads the staff preparing to facilitate, co-ordinate and judge the event. Feinauer is a Norwich faculty member in the David Crawford School of Engineering.

“There are 27 Vermont teams registered,” Feinauer said. “Seventeen are headed to Norwich and the other ten are competing at New Hampshire locations.”

“There are four components to the competition judging,” Feinauer explained. “The Robot Game, where you have two-and-a-half minutes to complete various tasks, creating a research project involving a specific real world problem relative to the “Nature’s Fury” theme (e.g. a flood, tsunami, earthquake, etc.), making a presentation, and the ability to work together as a team at an impromptu task.”

“We also bring the students together as a group without the coaches or parents to explain their programming to ensure it’s their own work that’s gone into the effort,” Feinauer said.

“The kids have eight weeks to work through somewhat daunting tasks,” Feinauer said. “It’s a competition, but you’ll see teams help each other out if there’s battery failure or a mechanical problem. They’re very supportive and interested in what the others are doing.”

Feinauer emphasized that parents and future coaches that wish to get involved with FIRST LEGO League do not have to have a technological background to succeed. “There are a lot of resources online. The kids are very good at finding information. The FIRST LEGO League web site (www.firstlegoleague.org) is a good place to start. There are tons of resources with good links. Norwich is trying to develop a resource center as well.”

Laura Rappold and Shawn Kasulka, organizers of an East Montpelier community team, found a September coaches training conducted by Feinauer to be helpful. “It’s our rookie season,” Rappold said, “so it was great to hear some of the veteran coaches’ experiences. We have a mix of 3rd and 5th grade girls and boys on our team, and we are learning along with them. The kids have worked really hard the past two months, and we can’t wait to experience our first FLL competition!”

“The event takes place in the Plumley Armory,” Feinauer said. “There will be a welcome ceremony at 9 a.m. The competition runs from 9:30-2. There are open house locations on campus to give the public a chance to see the facilities. There will be an awards ceremony at 3 p.m. All are welcome.”

American Cancer Society Relay For Life Is a Success

How to lose a sweet tooth

How to lose a sweet tooth