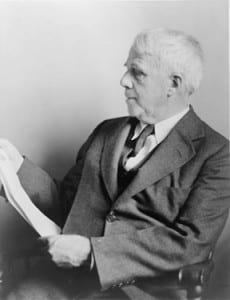 Dorothy Canfield Fisher had this to say about Robert Frost:

“Any state, even a self-contained, reticent state like Vermont, feels proud when out of all the other places in the world it is chosen for a home by a man of genius. There was a deep unspoken feeling that he belongs with us, that he alone in the world of poets puts into words what we Vermonters feel and what we had thought impossible to say or have said for us. Even the way he says it, his style, that much-admired Frost style seems to us to spring naturally from what we have always thought of as “the Vermont way of saying things,” indirectly, emphatically, obliquely, suggesting much with a few plain words, leaving most of the emotion unsaid, and all the more deeply felt and shared.”

Frost was born in 1874 in San Francisco, went to high school in Massachusetts, and then moved to New Hampshire. At the age of 46 he bought a farm in Shaftsbury, Vermont and for several years taught at Amherst College.

He received honorary degrees from Middlebury College and the University of Vermont. Frost was a pioneer in understanding how valuable Vermont land would become and bought several farms. To a close friend he wrote: “Save your money and buy a farm in Vermont.”

For the last quarter century of his life, Frost spent much time in Ripton, Vermont where national and world visitors would call upon him. His association with Middlebury College lasted over four decades. He was an active participant in the Bread Loaf Writers Conference. A close friend said that Bread Loaf was called “the most Frost bitten place in America.”

Frost was known for his friendliness, but also liked a good argument. He wrote the following about himself: “And were an epitaph to be my story I’d have a short one ready for my own. I would have written of me on my stone: I had a lover’s quarrel with the world.”

One of his biographers wrote:

“To read or hear or recite Frost’s great poetry is to share in the pursuit of a profound vision of human life. As we observe his speakers undertake physical, intellectual, and imaginative exploration, the power of their words and the beauty of their song persuades us that they deserve not only our attention, but also our commitment and fullest appreciation. Few modern American authors have more to offer us. Whether in America or around the world in Europe, Africa or Asia, we may find rewarding fields for our own exploration as we turn and turn again with increased understanding and enjoyment to those poems in which Frost made best use of his literary gifts and his extraordinary imagination, his special sensitivity to life in New England and his insight into human nature.”