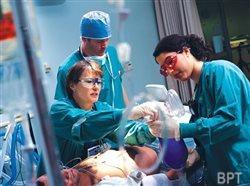 Catastrophes like the crash of Asiana Airlines Flight 214 in San Francisco and the Boston Marathon bombings have highlighted the extraordinary work of emergency departments (ED) and their indispensable role in health care.

While disasters such as these are rare, emergency medicine plays a pivotal role in our nation’s health care system every day. Emergency nurses, in particular, play an integral role in minimizing devastation when tragedy strikes.

In addition to providing care in critical circumstances, EDs frequently address the health care needs of the uninsured that do not have access to non-emergency health care providers. Many patients – nearly 80 percent, including those who have insurance – report visiting the ED if they do not have immediate access to care from a physician or other health care provider, according to a 2011 survey conducted by the Center for Disease Control.

This data reflects a growing trend – visits to EDs are on the rise. From 2001 to 2008, ED visits increased 60 percent faster than population growth during an eight year period, according to a study published in “Annals of Emergency Medicine.” The number of ED visits is expected to increase as the national population grows, and the U.S. population is projected to increase by nearly 27.3 percent by 2050, according to the U.S. Census Bureau’s 2012 National Projections.

This presents a challenge for communities as health care system consolidations and closures spread. The “Journal of the American Medical Association” reports that from 1990 to 2009, the number of EDs in non-rural areas declined by 27 percent. Hospitals will need to adapt to increases in the volume of patients seeking immediate care by being equipped with emergency professionals who can provide prompt valuation and care.

“Emergency nurses have the knowledge and skills to provide immediate assessment of patients and work quickly with physicians to determine next steps for treatment and care,” says JoAnn Lazarus, MSN, RN, CEN, 2013 president for the Emergency Nurses Association. “In emergency nursing, no two days are the same. Nurses must know how to help treat everything from broken bones to a heart attack, while remaining calm and acting as a patient advocate.”

David Zaworski, MSN, RN, is an instructor at Chamberlain College of Nursing in Cleveland. He understands the pressure and excitement of the unpredictability of the ED, as emergency nursing has been his specialty for the past 28 years. Five years after becoming a registered nurse, Zaworski worked at a Level I Trauma Center in Cleveland. Most recently, he worked part-time in the ED of a local community hospital, while teaching as a clinical instructor.

“What drew me to critical care – and especially emergency medicine – was the ability to work with a team of physicians, nurses and ancillary staff members,” says Zaworski. “My passion for the specialty is always growing because of the role emergency nurses play in caring for individuals and families at all stages in their lives. Those interested in pursuing this nursing specialty need excellent interpersonal skills to communicate information to doctors, patients and patients’ families, as well as the ability to multi-task.”

Working in an ED requires a firm foundation of basic nursing skills because of the urgent nature of emergency situations. Bachelor of Science in Nursing degree programs that include critical care courses, like those offered at Chamberlain College of Nursing, can prepare students interested in embarking on a career in the specialization.

“My experience within the emergency nursing field enhances what I teach future nurses because I can provide real-world examples of how I’ve applied classroom skills in the clinical setting,” he says.