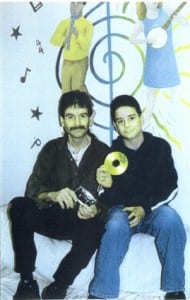 Just in time for Halloween, Barre native and musician of all trades Jim Miller has announced that his spooky soundtrack “R-U Scared” will be featured at the Barre ReSOURCE Store and Goodfellows Jewelers located in downtown Barre.

The production features over 70 minutes of eerie music and sounds.

It came about 17 years ago while Miller was an employee at Play It Again Sam, the music store in Montpelier.
He was checking out new equipment at the store during business hours and with headphones on, Miller plugged into a recording machine, and the next thing he knew he was creating “spookified” sounds and music.

“I had to stop and go to take care of customers and answer the phone,” Miller said. “I was recording going by the seat of my pants and never once did I delete a track and start over again.”

“Max was 10 years old at the time and I played it for him, and he said some of it was really scary and other tracks not that scary,” Miller said. “I asked him to listen to the whole record and pick out the most scary stuff and thus came his producing name “Mr. Max”.

“He went into the studio room and turned the lights out and then he came out of the room and said, ‘Dad, this part is good or not so good.’”

Since the creation of “R-U Scared” when Max was 10 years old, the elder Miller claims his son has discovered himself musically over the years and planet waves ahead of Dad.

Miller has had fun with “R-U Scared” every Halloween. Locals may have heard parts of it in local stage productions like “Dracula”, “Wizard of Oz”, and “Charlie and the Chocolate Factory to name a few.

Also in the past, “R-U Scared” has been available at music stores, party stores, and of all places, a pumpkin stand in Middlesex. It was a big hit at a party in Burlington, and last Halloween, Goodfellows Jewelers in Barre presented it on the sidewalk, as it will do again this year.

“This is the first time the disc will be played inside a retail business (ReSOURCE Store), and I can’t wait for the public response,” Miller said. “If anyone played this thing non-stop al day, it would make people go out of their heads.”

Center for Arts and Learning Invites Public to Community Discussion: Envisioning the Future of CAL

Center for Arts and Learning Invites Public to Community Discussion: Envisioning the Future of CAL