Reptiles and Amphibians Are on the Move

Reptiles and Amphibians Are on the Move 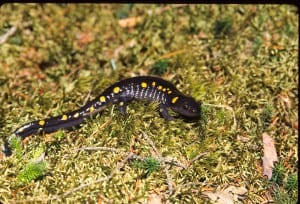 Spotted salamanders like this one will soon be crossing Vermont roadways to reach wetlands where they will breed. Photo by John Hall.

You may have already heard the spring peepers or wood frogs calling in your backyard. Or perhaps you’ve noticed salamanders crawling over rocks in a nearby stream. The arrival of spring brings the return of reptiles and amphibians to the Vermont landscape.

The frog calls you hear each spring are part of the animals’ breeding behavior, according to zoologist Mark Ferguson with the Vermont Fish & Wildlife Department.

“Many frogs and salamanders are starting their breeding season,” said Ferguson. “By late May, we should see turtles crossing the road to build nests in the sandy embankments.”

Amphibians migrate by the thousands each spring in search of breeding pools. This migration frequently takes them across roads and highways, leading to high rates of mortality among some species. Roadkill mortality, forest fragmentation and loss of wetland habitat have contributed to the decline of several of Vermont’s reptile and amphibian species.

“Most amphibian migration takes place over several rainy spring nights,” said Ferguson. “On these nights, drivers should slow down on roads near vernal pools and wetlands, or try to use an alternate route.”

Turtle activity peaks from late May through June. Drivers are urged to keep an eye out for turtles in the road, particularly when driving near ponds and wetlands.

“When you spot a turtle in the road, you may be able to help it across the road if you are in a safe spot to get out of your car,” said Ferguson. “For a snapping turtle, we recommend pushing the turtle across the road in the direction it was going with an object like a shovel to avoid getting too close to the turtle’s face.”

To report an amphibian or reptile sighting, visit the Vermont Reptile & Amphibian Atlas website at https://community.middlebury.edu/~herpatlas/. Jim Andrews with the Atlas website helps identify stretches of road that are hotspots for amphibian migration, and he works with other groups and volunteers to move the animals across the road and make drivers aware of these potentially high-mortality sites.

In an effort to allow wildlife to safely cross the road, the Fish & Wildlife Department is working with the Vermont Agency of Transportation to include culverts and wildlife barriers in road construction plans.