Having Trouble Paying Your Utility Bills Due to COVID-Related Economic Hardship?

Close Encounters of the Third Kind (1977)

Rotary Club of Barre Will Be Donating Masks

Vermont Minimum Wage to Increase In 2021

Excellence Awarded at Rise Up Bakery 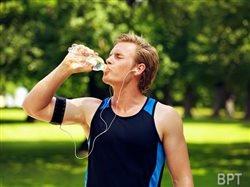 Some parts of the country are experiencing record high temperatures this summer. Las Vegas hit 117 degrees and Phoenix topped the charts at 119 degrees. Salt Lake City also hit the triple digits as did several areas in California. Dry heat or not, residents and visitors were undoubtedly feeling it, and anytime the mercury gets remotely close to these temperatures, staying hydrated is of paramount importance.

This is especially the case for anyone participating in outdoor activities or any sort of exercise program. Our bodies produce sweat in order to regulate our core body temperature. As the moisture that appears on your skin evaporates, you cool off. In fact, human beings are the most effective mammal when it comes to regulating our body temperature. At the extreme, an adult can sweat as much as two to four liters per hour.

All of this water needs to be replaced, but remember that when you sweat you are not just losing water, you are also losing minerals such as sodium and potassium. According to Dr. David McCarron, adjunct professor at University of California, Davis, “You must replace the sodium and potassium along with the water. This is why athletes drink sports drinks like Gatorade, rather than just water. Replacing water without sufficient sodium can quickly produce hyponatremia, a potentially fatal condition.”

Hyponatremia symptoms are similar to those of heat exhaustion and heat stroke, and are often overlooked. Symptoms range from mild to severe and can include nausea, muscle cramps, disorientation, confusion, seizures, coma and death. To avoid this condition, medical authorities advise marathon runners to consume extra salt and this advice should also be considered by anyone exposed to excessive heat. Salt is critical in maintaining hydration.

Sadly there have been several cases of illness and even deaths from hyponatremia over the past several years. According to the British Medical Journal, 16 runners have died as a result of too little sodium and over-hydration, and another 1,600 have become seriously ill. It is true that water intoxication is more commonly seen among extreme athletes but older individuals are also at high risk for several reasons.

As we age, our kidneys become less efficient at conserving salt when the body is stressed and common medications such as diuretics greatly increase that risk. That’s one of the reasons that during severe high temperatures news accounts most often refer to elderly victims of the heat.

The proper balance of electrolytes in the human body is essential for normal function of the cells and organs. Electrolytes help to regulate cardiovascular and neurological functions, fluid balance and oxygen delivery.

Ideally, anyone engaging in outdoor activity in the heat or even an indoor exercise program should drink 8 to 12 ounces of fluid every 15 to 20 minutes during a session. If exercising exceeds an hour, a beverage that contains salt and an energy carbohydrate is far superior to plain water. The recommended concentration of salt in a fluid replacement beverage is one quarter teaspoon per liter. Most sports drinks contain salt, although the amount is not quite that high. Anyone can make an alternative to commercial fluid replacement beverages easily by adding one quarter to one half teaspoon of salt per liter or 32 ounces of water.

Every day, more and more Americans are motivated to start exercise programs. Physical fitness is a state of good health resulting from regular exercise and good nutrition. When you exercise, your body’s metabolism works at a much higher rate, breaking down and regenerating tissues and creating waste metabolites that need to be flushed out of your system. However, regardless of your level of activity, you still need to maintain good hydration.

So remember to always drink plenty of water to beat heat, but also up your intake of electrolytes, particularly sodium and potassium. Learn more about staying hydrated by visiting www.ALittleSalt.org.

Enhance your outdoor space with an outdoor fireplace

Enhance your outdoor space with an outdoor fireplace