Reflections on the 75th Anniversary of D-Day

Reflections on the 75th Anniversary of D-Day

Our oldest daughter Kelly will be at the American Cemetery in Normandy on D-Day for the celebration. She’s a high school teacher at a private school and is a chaperone for the group of students. She landed at Heathrow on 01 June. 02 June was the Imperial War Museum and dining. Yesterday, the Underground, the London Eye, and finished her day at the Churchill War Rooms. Hours ago she boarded the Portsmouth Ferry taking her to Cherbourg. 07:21 CDT (GMT+7) she texted on WhatsApp, “In France!!” Lucky. 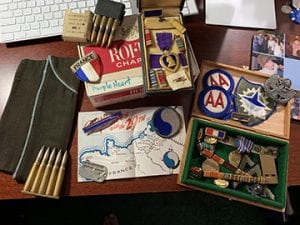 Kelly’s Grampy “Al”, my Dad was in the 29th Infantry Division, 175th Regiment, Omaha Beach. All evidence points that he landed after 16:30 local (officially D+1) with some resistance.

My Dad once told me, when he was offshore waiting to land, it was hours bouncing in circles as American battleships moved in to “soften the beach.” Finally in his Higgins boat, the Coxswain told Dad and all, “Drop your packs into the channel, there will be plenty of them on the beach!” “Get your rifles, we’re stopping short – over the sides!” He held his breath and was in water over his head. He power walked under water only with his Browning Automatic Rifle (BAR) and one single waist belt full of BAR 30.06 magazine ammo. “I just kept walking!” He made it to beach and within minutes was ordered up a draw that overlooked the beach. Two days later he learned that his two ammo bearers, both six foot tall men had drowned. 19 years old, 5’ 7”, at 175 lbs, he was 150 lbs when he finished. He was wounded near Brest, France on 12 September 1944 after an 88MM AA gun took a position firing down a sunken road he and others occupied. In the ditch under an overhanging hedgerow laying flat, one of his heels stuck up sufficiently to receive a razor blade sized shrapnel slice giving him that “million dollar” wound – relieving him off the battlefield. Both men on either side of Dad in that ditch were killed. He remained in hospital in England until shortly after VE Day. It would be five years before he could put weight on that heel.

He rarely or openly talked of his war experiences. He would leave the room when the 1960’s TV show Combat was playing as my little brother and I would watch. He would watch war movies with an aviation theme! He became a Commercial Pilot on the GI Bill.

At home In 1975, I was doing high school homework at our kitchen table with head down in the books. Dad walked by and I heard an unusual noise of something thrown into the kitchen trash can. Later and looking into the can to see, it was “the cigar box!” The cigar box (pictured right)that had his American Campaign Medal and Ribbon, American Defense Ribbon, European Campaign Medal and Ribbon with two Stars, Army Good Conduct Ribbon, Purple Heart Medal and Ribbon with collar pin and box, Bronze Star Medal and Ribbon with V, Combat Infantry Badge, Presidential Unit Citation with Gold Border, 29th Patch, PFC Chevrons new, 2 AA parches, a Red White and Blue France Patch, and other stuff. Retrieving that cigar box, I put it under my bed and kept it hidden.

Years later after buying my first home, I had his ribbons and medals on display. During a usual Sunday afternoon visit he spotting them. He looked at me and barked, “Hey! Those are mine!” I looked at him straight into his eyes and replied, “The Heck (clean) you say? Remember, you threw them away and now they’re mine!” He looked at me, shrugged his shoulders in expression and simply carried on as if nothing happened.

In early 1996, I had a Lockheed business trip to England during my F-22 days with fellow engineers. Six weeks before the scheduled trip, I asked Dad if he’d like to go to England with me and we might go to Omaha Beach? “Heck (clean version) no, I’ve not lost (clean version) anything over there.” A week before the trip he called and asked, “Ya think I could go with you?” Well of course and would’ve been easier to be on the same flight.

Five days later after our work in SE England was finished during March 1996, my Dad and I said goodby to my Lockheed team. We took the train through the Chunnel to Paris, dined and rested the remainder of the day.

Our next day was an early get up and we caught the first train of the day to Caen, France. He was excited being in France and especially when those young French women found out he was part of the liberation. Wow?!?

Quickly getting the Avis rental car at Caen and with no map, I drove us and following the road to Saint-Laurent-sur-Mer and by coincidence, we found the Omaha Beach 1st Infantry Monument. No surprise being a student of World War II history. (I don’t think he cared for the Big Red One due to a profound statement witnessed). Dad and I walked to a high point over looking the beach. He looked west and said, “Nope, this isn’t it!” Stopping several times at the end of dirt roads leading to beach between farm sections, we’d get out to view. “Not here!”

Finally, we found a view. As he looked west, “This is it!” Driving down to the beach we came to the Omaha Beach 29th Infantry Monument at Vierville-sur-Mer. Wandering the beach west he spotted where he first came on the beach and pointed out the hardened machine gun emplacements that decimated men with effective crossfire. Walking up that draw and passing those emplacements took us around to Pointe du Hoc.

Unbelievable to see those deep bomb craters within Pointe du Hoc and those once fortified Nazi gun pit casements that had somewhat sustained the American might, were now crumbling from nature. Not much time was spent there as Dad had no interest. Onto the American Cemetery at Normandy.

Arrival to the cemetery was quiet as Dad was to himself. Holding back, I watched him walk away and to and from the many white cross monuments and up to a Great Wall as if he was looking for someone. All of the names and a few unknown were shown–warriors that rest in one of the most beautiful places I’ve ever seen. The cemetery grounds had green blades of grass that I swear were standing at attention. Those white crosses were precisely lined up to what seemed to infinity!

Dad was far away across the cemetery at a large mural- mapped wall showing invasion arrows of the Allies into the Continent. Keeping him in sight, I found the imposing giant bronze statue of Ike, inside the cemetery. Being there was peaceful. You could only hear the wind within the trees, gentle footsteps, and the smell of the light ocean breeze. Our day was ending.

We joined up and started the drive to catch the last train from Caen to Paris. A few words were spoken as we returned the rental car. I picked up a Heineken 6 Pack for the train ride. Halfway to Paris and two beers left, he fell asleep on my shoulder as we sat together on the train.

I saw him to his flight at Charles de Gaulle Airport and I caught my American flight to DFW. As we climbed west leaving Paris, I had a business class window seat with a perfect view of Normandy, the Cemetery, and the invasion beaches of Utah, Omaha, Gold, Juno and Sword!

Getting home at DFW, we arrived within minutes of each other. We drove straight to the nursing home where my Mom (his wife) was living due to ailments of dementia and Alzheimer’s. First words Dad spoke to her, “Hey Honey, I went to Normandy and Omaha Beach!” Somewhat expressionless, she nodded, maybe in agreement.

A week later, Dad called me in a rage of a cussing tirade spouting “I wished I never gone over there” and “Why did I let you talk me into going?”

It took years to understand about PTSD and those trigger effects in his life and his condition with PTSD and perhaps from a concussion brain injury that happened to him.

I’d placed him in a nursing home only 10 minutes away from home. As a blessing, I got laid off from a good paying flying job due to the 2009 downturn. I spent almost everyday with him for 16 months watching him go further into age related decay. That was a task, very difficult and challenging. He made it 87 years and Dad is in the Columbarium with Mom at the DFW National Cemetery.

He’d once joked, “It only cost me $150 to be buried in The DFW National Cemetery.”